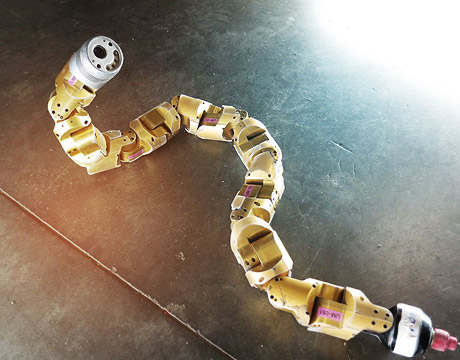 Researchers used what they learned from observations of sidewinder snakes to improve the operation of this robot. Image: Carnegie Mellon

Inspiration from the Sidewinder

In recent years, the field of robotics has been inspired by some seriously fast animals. From the lightning fast cheetah to the gravity-defying hummingbird. Now inspiration is coming from a new source in the animal kingdom: the snake.

More known for its poisonous characteristics than for the quickness of its movements, a team at Georgia Tech has found they are under the spell of the snake—the sidewinder, specifically. It may take a backseat to the rattler and boa constrictor in terms of infamy, but assistant professor of physics Daniel Goldman assures us the sidewinder snake should not be overlooked.

“I was part of building a sand swimming robot with servos,” he explains. “It got me thinking that we really could use these robots, particularly in these granular environments, as an essential tool to understand the biology. A good part of this was because we didn’t necessarily have the mathematical models of the environment. From the biophysics point of view, like how snakes move around, it was interesting. Then a colleague, David Hu, said that sidewinders look so crazy and they only hang out in sandy, loose environments so why is their gait so good?”

That set the wheels in motion and collaboration increased. Joe Mendelson (at Zoo Atlanta) helped coordinate the building of a shed in the back of a zoo with a device called a fluidized bed. “It’s basically a bed of sand with a porous bottom where you can flow air up and the sand bubbles and turns into a fluid,” he says. “And it ultimately allows the animal to not experience tracks of the animals before,” Goldman says.

Sidewinders were brought in and they found these snakes were great collaborators themselves, sidewinding almost on command, he says. “I was also collaborating with Howie Choset [Carnegie Mellon University Robotics Professor] and he was building snake robots for a long time and was interested in them for search and rescue, but his robots were having trouble with sandy slopes. He teamed up with us and he brought a robot to the zoo. We could manipulate the parameters in a way we like to do as physicists and see how sensitive locomotion is to it. On flat sand, it’s not sensitive but on kilted, on sand dunes, it is. Sidewinding ends up being a gait that’s quite good on level sand. And it’s really good on slopes, providing a flexible way to control your body.”

This helped the “Modsnake” at Carnegie Mellon University, a robot that is a meter long with 16 modules. “Over here, we do it like a physicist, we don’t do it like the real world. We want it to work in a laboratory. We had one postdoc make a 3D printed sidewinding multilink robot. What we discovered was to generate sidewinding you can use ways to make sidewinding what you would see in animals and, in some ways, what you wouldn’t.”

For Further Discussion
Sidewinding ends up being a gait that’s quite good on level sand. And it’s really good on slopes, providing a flexible way to control your body.Prof. Daniel Goldman, Georgia Tech