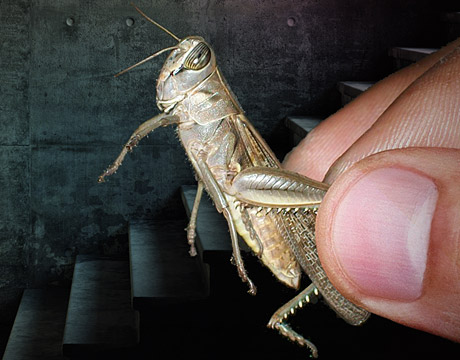 Inspiration from the Basement

Mother Nature has inspired engineers in their work for years. The quickness of the cheetah, the flight of a bird, but the cricket?

“I was working in bioinspired locomotion and I’ve always been interested in understanding locomotion with an engineering perspective and using high-speed videography and computational modeling,” explains Rajat Mittal, professor of engineering at Johns Hopkins University.

But, believe or not, he didn’t start out thinking crickets would be a subject of study.

You see, in some areas of the Northeast, especially where Mittal lives, basements have been overrun by crickets, he says. “I’ve had this problem and, as a homeowner, I was trying to figure out how to get rid of them. But I started looking at these crickets and they are incredible when it comes to jumping. They’re jumping several meters and it’s something like fifty to sixty times the length of their body. When they jump, you see how they do it in relation to landing on their feet and it looked controlled. That was the genesis of this project: Are these animals doing something interesting to stabilize themselves in the air?”

Using high-speed video, there were 100 to 200 frames that basically covered the entire jump. The high-speed video system contained three cameras to get a view of the same area from three different directions. Building an acrylic enclosure, they jumped in the enclosure and the bottom surface had sandpaper for traction for the landing.

Mittal said the hypothesis was that the configuration of the cricket’s body would turn out to be aerodynamically stable.

In the end, it was found that the cricket minimizes drag and, about 30-40% of the way through they jump, they quickly transition from drag-minimizing confirmation, to aerodynamic stabilizing. They do this within a jump that would be the equivalent of a human jumping about the length of a football field and it’s completed in less than half of a second.

One question was if these principals of aerodynamic stabilization could be streamlined to build very small-scale robots, he says. “They could be potentially used in complicated domains,” he says. “Jumping in many situations can just be a more effective mode of locomotion than crawling or flying. Let’s say it’s a disaster earthquake situation or a fire search and rescue is ongoing. You might have people gathered in rubble, there are nooks and crannies possibly involved, and crawling robots would have a tough time getting over very jagged debris and rocks and the broken terrain. Flying robots take up a lot of energy and they may only have limited juice. But jumping robots could both potentially avoid getting stuck and also get to the areas you need.”

For Mittal, the work to this point has been extremely gratifying, with his team including undergraduate students and a high school student. “Every once in a while you find inspiration from something that’s been right there in front of you the whole time,” he says. “Here, it was in my basement.”

Every once in a while you find inspiration from something that’s been right there in front of you the whole time. Here, it was in my basement.Prof. Rajat Mittal, Johns Hopkins University