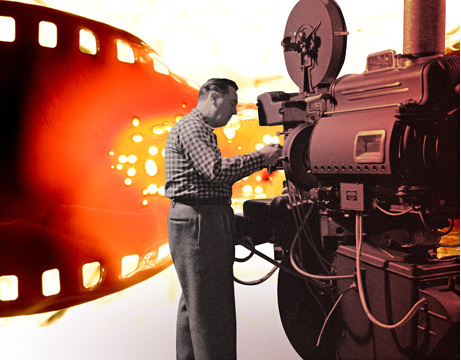 Whether it’s for a panic-inducing horror film or sci-fi adventure, we’ve all been to the cinema. But how much do we really know about this popular pastime?

Movie projection works because our brains retain an image for slightly longer, one twenty-fifth of a second to be exact, than we actually see it. Film, which is made up of single images, or frames, moves continuously along a feed disc, operated by an electric motor. Each frame pauses for a fraction of a second in front of the lamp and lens assembly.Here, the film is illuminated and projected onto the screen through a lens. The continuous succession of the frames causes our brains to connect each image and they seem to move.

What about the work of the people behind the magic, upstairs in the projection booth? When it comes to 35mm film, it’s not as simple as just pressing play. Before the era of digital projection, “it was a labor intensive job,” says Joe Rivierzo, a third generation projectionist and executive board member of the New York City projectionist Local 306. Multiplexes were uncommon, fires arose, and equipment often malfunctioned.

“Anything could go wrong and we were responsible for the maintenance and the first aid. We were EMTs, if you will, in the projection booth,” says Rivierzo. “We weren’t certified technicians so we weren’t surgeons, but we had to know enough to apply first aid and that encompassed the film itself, the mechanics of the projectors, the electronics of the lamps, the mechanics of the platters, the sound systems, any one of those items could fail.”

Being a projectionist was a dangerous and difficult job before innovations made projection safer and automated.

From Fire to Polyester

The first available film used in commercial movie projection was nitrate, a transparent, plasticized film base. It produced a vivid, high contrast black and white image onto the screen. The quality of the image was rich and precise. With precision came a drawback, however, because nitrate film is incredibly flammable, and, because nitrocellulose is composed of oxygen, it’s very difficult to extinguish once ignited.

When nitrate film base was used in movie projection, projectors used a carbon arc lamp the illuminate the images. These lamps were unenclosed and could generate immense heat or spark.

“There was a tremendous fear that if a fire broke out in an auditorium that there would be a stampede. People could get hurt,” Rivierzo says.

Many projection booth fires did occur due to the use of nitrate film during early decades of movie projection.

To solve this issue, nitrate was discontinued in the 1950s. Polyester bases, which were stronger, flexible, and, most importantly, not highly flammable, took its place. A polyester base was also much more chemically stable and allowed for the construction of thinner films, which took up much less room.

Projectors used carbon arc lamps until the late 1960s. “The length of those carbons for whatever reason was only twenty minutes which also dictated the length of the reel,” says Rivierzo. Each reel could only be twenty minutes long or less, which meant that several reels of film had to be used for a single feature. Carbon arcs were costly, and had to be changed often.

To save money and manpower, Xenon bulbs replaced the carbon arcs in film projectors. A Xenon bulb has a fused quartz outer shell, and a metal electrode at each end of the lamp. The bulb creates light by emitting electricity through xenon gas at high pressures. “It gave a brilliant white light and it became inexpensive,” says Rivierzo. Not only were they cheaper, but they lasted longer. “These Xenon bulbs would run for a thousand hours before needing to be changed.”

“Further past that cue there was another cue that would tell you to shut off projector one and turn to number two which would make it a seamless transition. So you [the viewer] thought that it was continuous,” Rivierzo says. The projectionist would then have to load the third reel onto projector number one, and the process continues until all of the reels were played. Then, all of these reels had to be manually rewinded for the next show.

That is, until the platter system was introduced.

With this system, the individual reels are spliced together to create a single reel. The single reel containing the entire feature is wound onto a round, rotating table, or a platter, which is located next to the projector. Controlled by a payout mechanism, the platter feeds the film reel through a feed disc continuously through the projector. An empty platter below it, or the “take up reel”, collects the film already displayed on the screen and rewinds it.

Rivierzo attributes this system to the rise of multiplexes. With the two projector system, “if you had a Tenplex you’d need ten guys for each auditorium waiting for a reel to end and put on the next reel. When you got these platter systems you didn’t need that,” Rivierzo says.

For Further Discussion
There was a tremendous fear that if a fire broke out in an auditorium that there would be a stampede. People could get hurt.Joe Rivierzo, Projectionist, Local 306