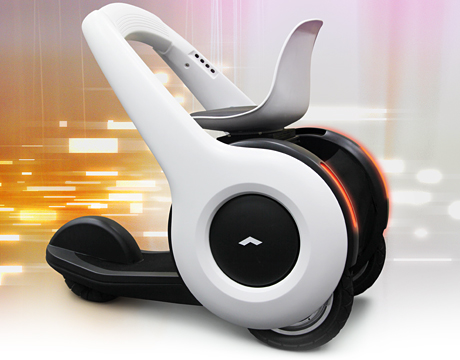 What happens when an industrial designer, a product engineer, and a medical device engineer join hands with two mechanical engineers? A new device is invented – one that promises to improve the lives of the disabled and the elderly by improving their mobility.

Founded by young engineers, a Japanese startup named WHILL, now based in Menlo Park, CA (since becoming a part of the 500 Startups accelerator), has designed and developed an electric personal mobility vehicle called WHILL Type A that aims to maximize mobility and eliminate the negative stigma attached to wheelchairs.

“Most wheelchairs have very small wheels. You can achieve small turning radius but its ground coverage is pretty poor,” says WHILL’s co-founder and CEO Satoshi Sugie. “Our front wheel is really special. It is composed of 24 smaller wheels, which allow the front wheel to move in any radial direction seamlessly,” says Sugie, adding that WHILL's sleek and modern design will release people from the stigma of using wheelchairs and its special front wheel technology will realize both a small turning radius and better ground covering ability at the same time.

Due to the bulky size of their wheels, wheelchairs tend to be tough to maneuver, especially while traveling. To solve this problem, the WHILL team followed a user-centered design approach. “To make ourselves see things from the viewpoint of actual users was very challenging,” says Sugie. The WHILL team worked with users, caregivers, and healthcare professionals over several months and enhanced the prototype based on their feedback.

WHILL’s design includes two circular hubs that are attached to the outside of a rear wheels extending to the upper front side that can easily move up or down. It covers 15 miles per one charge witha maximum speed of 6 MPH. According to the company web site, WHILL can rotate on the spot by utilizing the left and right motors at different times and thanks to the front wheel technology to achieve efficient maneuverability and mobility. It is also big enough to get over a bump or crack up to three inches high on the road.

Unlike current power wheelchairs and mobility scooters that demand users sit in a laid-back position (like sitting on a couch) at all times, WHILL Type A control lets you “lean in” to the product you are driving (like riding a bicycle). To drive, the users simply lean on the front bar. “The posture which is made naturally by the front bar makes users lean forward and look proactive. An intuitive driving interface and control system provides them with a fun and smart driving experience,” says Sugie.

The WHILL team first unveiled WHILL Concept, which was the first prototype and was an attachment device that can clamp onto the wheels of an ordinary manual wheelchair and turn it into an electric wheelchair, back in 2011 at the Tokyo Motor Show. Then they created the WHILL Type-A and sought wheelchair users to help test it in the field so they could design a product suitable for commercial production. The latest working model that they plan to launch in the U.S. in early 2014 is the result of intensive research and multiple iterations.

“For the launch, we have been talking with a veteran association hospital in the Bay Area and a spinal cord injury doctor in Stanford Hospital. We will soon be formally accepting pre-orders and planning test drive events in California,” says Atsushi Mizushima, WHILL’s director of business development.

Since the company also targets the elderly population, the company is marketing it as a personal mobility electric vehicle. “We already have international patents for design and product patents are pending,” says Mizushima, informing that the company is also working with an FDA consultant to seek agency approval by 2015.

A key aspect of the WHILL Type A will be making it affordable for the public. “Our price will be a little bit higher than ordinary wheelchairs but not extremely high,” says Sugie. To get beyond this phase, Sugie and his team will have to figure out how to make their electric wheelchair more suitable for the disabled, expand worldwide, and scale up, while still being commercially viable.

Sugie is confident that his team – four engineers with diverse expertise who have been working together on tech products even before WHILL was launched and have had experience in the industry working for major Japanese companies like Nissan, Sony, and Olympus, plus one MBA with a strong business acumen – has what it takes to propel WHILL to the next level. The $1 million in funding that the Japanese startup recently raised will also help them move closer to their goal.

For Further Discussion
To make ourselves see things from the viewpoint of actual users was very challenging.Satoshi Sugie, CEO, WHILL