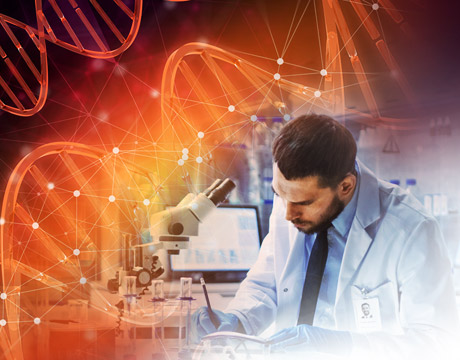 Most researchers use near infrared light (wavelengths between 700 and 900 nanometers) for in vivo imaging within the body. Shortwave infrared light (SWIR) (1,000 to 2,000 nanometers) has the potential to provide even better results, because body tissues are more transparent at that wavelength. SWIR advantages over the visible and near-infrared regions include less autofluorescence, low light absorption by blood and tissue, and reduced scattering.

The lack of bright, stable, and high-quality SWIR emitters/markers has prevented the general adoption of SWIR imaging by biomedical researchers. Now, however, a team of researchers at the Massachusetts Institute of Technology has discovered a way to make nanoscale particles that can be injected into the body, where they emit SWIR in targeted areas. These “quantum dots” provide researchers with remarkably detailed images of internal body structures and processes.

“We took advantage of a special property of short-wave infrared light, which is essentially the ability to give a clear, bright signal emitted from the targeted structure that is not blocked or scattered by the surrounding tissues,” says research scientist Oliver Bruns, a member of the MIT research team. “This allows us to view biological processes in living, moving animals with great clarity and detail.”

Bruns and his team developed a class of high-quality SWIR-emissive indium-arsenide-based quantum dots, which can be modified for various imaging applications. They exhibit narrow and size-tunable emission and a dramatically higher emission quantum yield compared to other SWIR probes. These quantum-dot nanocrystals emit light at a specific frequency that can be precisely tuned by controlling the exact size and composition of the particles.

The MIT team injected the quantum dots into mice to determine the metabolic turnover rates of lipoproteins in several organs, simultaneously and in real time. They also measured heartbeat and breathing rates in awake and unrestrained animals, resulting in a detailed 3D quantitative flow map of the mouse brain vasculature.

The quantum dots emitted short-wave infrared frequencies that were bright enough to be easily detected through the surrounding skin and muscle tissues. In fact, the dots were so bright their emissions were captured with very short exposure times.

“We could track the flow in each and every capillary, at super-high speed,” he says. “This allowed the quantitative measure of flow at very high resolution, over large areas.”

Further, Bruns notes, this was accomplished while the mice were awake and moving, as opposed to previous methods that required them to be anesthetized.

This new imaging system could become a standard approach in the future for making detailed images of internal body structures, such as the fine networks of blood vessels.

“We are still stunned by the quality of the images we can take using short wave infrared emitters,” says Bruns. “It is amazing to get such a clear look at dynamic biological processes.”

Initial applications for this system would be preclinical research in animals, since the compounds contain some materials that are unlikely to be approved for human use; in the meantime, Bruns and his team are developing versions of the quantum dots that will be safer for humans.

Once approved, future applications could include using quantum dots to study how blood flow patterns in a tumor change as the tumor develops, possibly providing insights into new ways to monitor disease progression and determine the efficacy of drug treatments.

“Our vision is that 5 to 10 years from now, SWIR imaging systems will be a standard for preclinical and clinical optical imaging,” says Bruns. “Hopefully every research center and every major clinic will have one.”

For Further Discussion
We are still stunned by the quality of the images we can take using short wave infrared emitters. It is amazing to get such a clear look at dynamic biological processes. Prof. Oliver Bruns, Massachusetts Institute of Technology