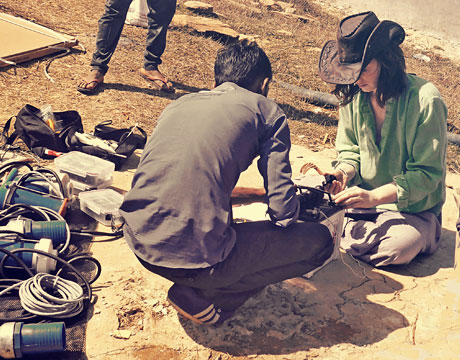 Recent MIT engineering graduates Katherine Taylor and Kevin Simon are hoping to help bring much needed water—inexpensively—to some 23 million small-acreage farmers in eastern India because their livelihoods depend on good production.

While there are excellent water resources in the Ganges River basin, including a high water table, these farmers typically growing on an acre or less of land have no affordable way to get water to their crops.

At first, Taylor, who earned her master’s degree in mechanical engineering in 2015 from MIT and is a fellow at the Tata Center for Technology and Design; and Simon, another Tata Fellow and also recent master’s recipient in systems engineering, began exploring drip irrigation. Taylor’s thesis work involved designing a drip emitter that functions under very low pressure, which would cut operating pressure and costs. But they soon realized that the $1,000 or more installation cost was too expensive for the farmers.

The Tata Center, part of the MIT Energy Initiative founded in 2012, has a research and education mission of training engineers and entrepreneurs to tackle challenges of resource-constrained communities in India and other developing areas and come up with relevant, practical solutions.

The team, led by ME Assistant Professor Amos Winter, which also includes Marcos Esparza, who earned his bachelor’s degree in mechanical engineering from MIT this year, changed directions and began exploring pumps powered by solar, ideal for this purpose. Says Taylor: “It’s a great feedback loop. The more sun, the higher the radiance and the hotter it is, the more power you get to the pump.” But for a variety of reasons, no solar pump had been designed to meet their needs.

The only irrigation option for farmers has been costly, inefficient diesel pumps because of lack of access to an electrical grid. That has meant many cultivate their land only when rain is plentiful because of the prohibitive costs of diesel fuel. It is believed that less than 5 percent of the land is planted during the dry season even though the land is very fertile and could be used year-round with proper irrigation.

Taylor and Simon have been traveling to India once or twice a year since 2013, talking to farmers and learning the conditions under which the pumps will be used. After two years, the team early this year filled suitcases with pumps, tools, and replacement parts and set up on location to build a pump that would exceed the performance standards of current models while being affordable, robust, and entirely solar-powered.

“It was really in-the-field engineering,” Taylor says. After building and testing the pump, farmers were trained in its use, and surprisingly found it much easier to operate than the diesel pump. The pump has been operating at efficiencies of about 30 percent to 35 percent, higher than the 10 percent to 20 percent of the diesel pumps, which made fuel costs very high.

A key time will be in the summer when the team returns to the area just as the dry season ends to assess how much land was cultivated during the dry period. Another reason for the trip is to conduct many more interviews with the farmers. “We think we will learn a great deal,” says Simon. “We only had time to do about four or five the last time because we were focusing on the technical side.”

Simon says much of the challenge has been learning about the farmers’ lives and what’s relevant to them. “There is only so much we can understand on short visits,” he says. To help understand the farmers’ lifestyles and also to be able to communicate with them, particularly from the U.S., the team partners with an established Indian-based NGO, PRADAN.

“When we’re in the U.S., our communication with the farmers is strictly through PRADAN,” Simon says. “We are not expecting any big surprises because we usually have weekly conversations with PRADAN. We’re really excited to have this summer to give us a chance to examine the value proposition and are very ready to make any changes that they feel meet their needs better. If they want more or less flow, there is a wide variety of things we could alter. It’s such a big problem around the world that it’s really worth getting right.” Nancy S. Giges is an independent writer.

For Further Discussion
It’s a great feedback loop, the more sun, the higher the radiance and the hotter it is, the more power you get to the pump.Katherine Taylor, Fellow, Tata Center for Technology and Design