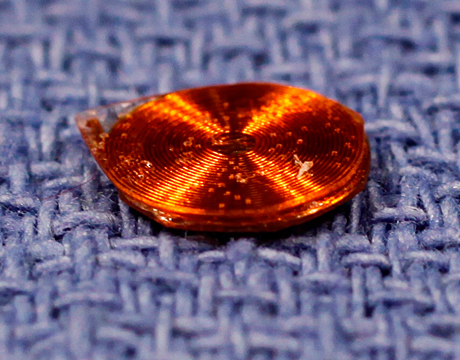 Implantable sensors have been used in medical research for measuring parameters such as force, torque, pressure, and temperature inside the human body. Although sensors and electronics have been built into orthopedic implants, they tend to be bulky, costly, and unreliable. However, microfabrication and nanofabrication technologies have now advanced to the point where wireless, passive sensor systems can be incorporated into implants with little modification to the host implant, providing unique, personalized data for each patient that can be used to optimize outcomes.

These advanced sensor systems must be small in size, compatible with human tissue, and sturdy enough to withstand the physical forces within the human body. They must also be self-powered and able to transmit data wirelessly. Ideal sensor systems are simple and robust, which minimizes the possibility of malfunction or failure.

“These sensors can measure things that can’t be measured any other way in the body,” indicates lead researcher Eric Ledet, associate professor of biomedical engineering at RPI. “They can be used to detect healing. They can also be used to flag problems that can then be addressed before they become significant. The information from the sensors helps optimize the care each patient receives. Ultimately, we believe the sensors will lead to better outcomes, quicker return to work and to daily activities, and reduced healthcare costs.”

The single-component, inductor-capacitor (L-C) sensors have no electrical connections. They consist of only two components, which makes them simple to operate and inexpensive to manufacture. Two flat parallel coils (which are separated by a solid dielectric) behave as both the capacitor and inductor. The dielectric deforms when it is loaded, which changes the size of the gap between the coils. This modulates the capacitance and the resonant frequency.

The sensors were built with wires of various gauge and diameter. Spin coating of the dielectric achieved consistent layer thicknesses of 10 microns or less. By combining different wire gauges, diameters, and dielectric thicknesses, the team was able to construct sensors with tunable force sensitivity. The application of forces from 0 to 100N resulted in consistent and repeatable frequency shifts. The resonant frequencies were detected with an antenna and associated instrumentation.

“The sensors can be tuned to measure force, pressure, temperature, pH, or other physical parameters,” says Ledet. “They can be fabricated in various configurations down to a few millimeters in diameter and few hundred microns in thickness.”

Simple, robust, and inexpensive implantable sensors hold great promise for medical procedures such as spinal fusion and arthroplasty. Being able to monitor load-sharing between implant and bone will allow clinicians to identify problems early in their development. “Union can also be detected earlier, which can result in a quicker return to work and reduction of lost wages,” says Ledet. “Likewise, early detection of prosthesis migration or loosening by measuring micromotion between the implant and the bone may permit early intervention. In each application, onboard data storage and patient feedback technology can provide an early warning directly to the patient to prompt activity modification.”

The design of tiny wireless force sensors that fit easily into implants or tissues is a key factor in advancing the real-time measurement of forces in the musculoskeletal system. For example, future research may involve using multiple sensors in a multi-axial load cell to monitor in vivo loading in the spine, in real time.

“Smart implants have the potential to significantly impact the way we practice medicine,” says Ledet. “By enabling personalized medicine, each patient’s treatment can be optimized. The key to this is economical and robust implantable sensors. For decades, this has been elusive. However, simple passive resonator-based sensors may be a viable option to bringing smart implant into daily clinical practice. Using our technology, in the future sensors can theoretically be tuned to measure the presence or absence of specific chemicals, molecules, or biologics.”

For Further Discussion
These sensors can measure things that can’t be measured any other way in the body.Prof. Eric Ledet, Rensselaer Polytechnic Institute