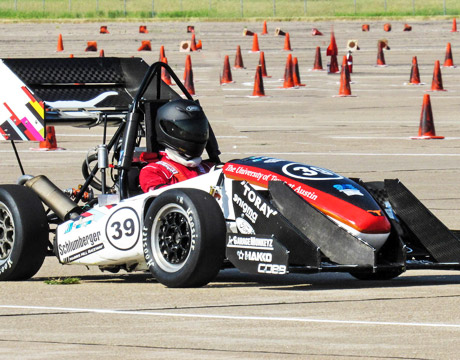 When many think of a hybrid vehicle, they think about the environmental benefit, not racing. At the New Hampshire Motor Speedway, they’re thinking about winning—and learning. The Formula Hybrid competition, now in its second decade, challenges racers to work within the constraints, and see the opportunities, of this alternative vehicle.

Perhaps the most significant segment of the event is the endurance stage. It has an energy limit and is run on a hilly section of the road course at the New Hampshire Motor Speedway. Drivers complete 22 laps of one kilometer each and it must be done on 35.5 megajoules, Fraser says.

Therepresently are two categories of cars.Eventually organizers wantall hybrids but presently the field is filled by including electrics, he says.

Every vehiclestarts with the same amount of energy. In a perfect world, drives would coast across the finish line on an empty fuel tank and Fraser said they’ve had teams that pretty much did that.

One such memorable moment was when the University of Texas at Austin team ran their systems completely dry, Fraser says. The car was on the track and stopped on the very last lap, needing five minutes to get 100 yards. The crowd, as he recollects, was just fired up by the drama of whether the team could finish.

Events have also been scheduled in the past to focus on areas such as maneuverability and acceleration.

Reliability, in the end, truly is key, as the majority of teams arrive still trying to finish their cars. For this problem, the organization has project management reports and status updates to try to keep them on track.

One team that excelled and finished second at last year’s event was the Milwaukee School of Engineering. David Roulo, who is now project manager for the team, says they focused on reliability.

“We had a cool idea for the transmission but we learned it had to be something for the future,” says the mechanical engineering major. “We decided to go with a chain drive for last year’s competition and made it all in house. It was machined by one of our sophomore members in our machine shop. There was a lot of work in finding the right gear reduction ratios. We had a lot of underclassmen and were asking them to do a lot outside of what they were learning.”

The competition has seen much growth in enthusiasm. “Finishing fourth in 2015, we attracted more members and the second place finish has seen so many join,"says Roulo."This year we have 15 seniors and 49 underclassmen. We have so many people who want to help.”

Team members are even working on the future now. “You have a chassis we’re working on that could be a part of things as early as 2018,” he says. “Another group is working on a future pedal box. We never stop thinking.”

Roulo, who has been a part of the team since his freshman year and is now a senior, says he takes much more with him than just the thrill of competition.

“I’ve gained great knowledge in how to operate machine shop tools: a lathe, a mill. It’s important in that it makes you learn to build your own parts," he says. "That started from freshman year. I learned a lot more about electrical systems than I ever thought I would and gained knowledge of how a hybrid works and how to design a chassis for a racing application. It took extra effort to learn these things outside of class and, the great thing is, I’m still learning.”

I learned a lot more about electrical systems than I ever thought I would and gained knowledge of how hybrids work and how to design a chassis for a racing application. It took extra effort to learn these things outside of class and, the great thing is, I’m still learning.David Roulo, Milwaukee School of Engineering