How the Cotton Gin Started the Civil War

How the Cotton Gin Started the Civil War 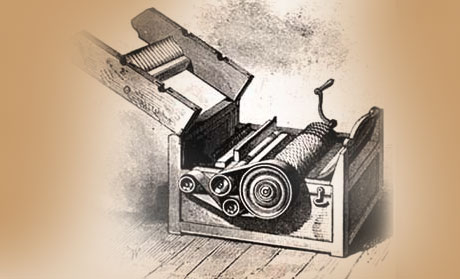 Designing a new machine or improving a process can take a fair amount of thought and consideration; once prototyped, it can still take years or even decades to be commercialized and have an impact on society. Sometimes, however, the entire process can be marvelously quick, easy, and world-changing.

Take, for example, the cotton gin.

Eli Whitney conceived this device almost on the spur of the moment. Yet, for all its fame and historic significance, one rarely sees an illustration of this legendary machine. Knowing as much as we do about its reputation and being conditioned to expect a revelation, when present-day engineers see the primitive hardware of the machine, it’s usually a bit of a letdown. Although simple in design, the cotton gin solved a pressing economic problem and transformed both agricultural and industrial America. Only after comparing the economy of the American South before and after the introduction of the gin can we appreciate its historic impact.

Before the cotton gin, cotton was a troublesome crop. Its fiber could only be separated from the sticky, embedded seeds by hand, a grueling and exhausting process.

This changed dramatically, of course, with the advent of the cotton gin. Suddenly cotton became a lucrative crop and a major export for the South. However, because of this increased demand, many more slaves were needed to grow cotton and harvest the fields. Slave ownership became a fiery national issue and eventually led to the Civil War.

It was only a matter of chance that Whitney became involved with cotton growing. After graduating from Yale University in 1792 with hopes of becoming a lawyer, he traveled to South Carolina to accept a job as a tutor. His landlady, Catherine Greene, owned a plantation and raised some cotton. After getting into a discussion with her and several other plantation owners about the fact there was no economical method of separating seeds from cotton fiber, Whitney examined whether it could be done mechanically. Some sources suggest the idea for using brush-like components to comb out the seeds came from Greene, while others highlight the experience of slaves working on her plantation. Regardless, Whitney soon had a design.

He spent the next few months building a prototype. The gin itself comprised a rotating drum with wire hooks or ratchet-like teeth that pulled cotton fibers between the teeth of a comb. The comb had teeth spaced too closely for seeds to pass through. Only one aspect of the machine can be regarded as serious mechanisms design. A second drum, rotating faster than the first and carrying brushes, served to dislodge the cotton fibers from the first. This was driven, along with the larger drum, by a belt-and-pulley arrangement typically having a four-to-one ratio. Cotton bolls were loaded into a hopper, which guided them to the face of the comb. After being pulled through by the toothed cylinder, the separated cotton fibers emerged at the left and the seeds collected to the right.

Whitney's design was almost immediately stolen and counterfeited a vast number of times. After years of patent litigation he received only a tiny fraction of the wealth to which he was entitled. He continued to invent. Ten years later, because of his reputation as an innovator, he won a government contract to produce 10,000 muskets—a previously unheard-of number. To manufacture the gun locks, Whitney invented the milling machine that is the staple of machine shop production today.

Although Whitney’s invention only involved a few hundred kilograms of matter, it shaped the future of a nation and its people; it is rare that a single contrivance has such a profound social effect.

[Adapted from “A Turn of the Crank Started the Civil War” by Robert O. Woods, ASME Fellow, for Mechanical Engineering, September 2009.]

Only after comparing the economy of the American South before and after the introduction of the gin can we appreciate its historic impact.