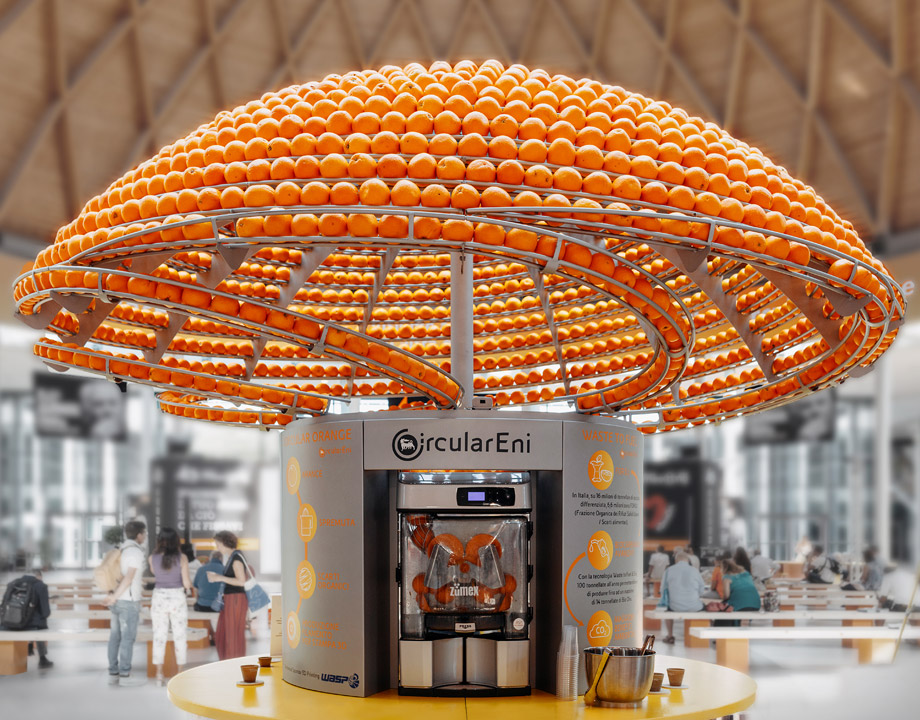 This machine squeezes fruit—and pours the juice into cups 3D printed from the peels. Image: CRA

How Oranges Can Explain the Circular Economy

Oranges aren’t just for orange juice anymore. Or for eating. Now, thanks to the efforts of the Italian innovation and design firm Carlo Ratti Associati, oranges are also for drinking. Which is to say, for drinking out of.

Their new juicer, called Feel the Peel, keeps the rinds of the fruit and turns them into cups.

The massive machine, more fungal than fruity in appearance, was commissioned by the energy company Eni to illustrate the concept of the circular economy—eliminating waste and pollution in design and manufacturing.

“We also wanted to show just how many materials are wasted in our everyday life and how easy it can be to reuse them in an innovative way,” said Alessandro Tassinari, CRA’s head of digital prototyping and fabrication.

To maximize the use of the entire orange, after splitting oranges and juicing, Feel the Peel collects rinds in a transparent base. They are then put into a dehydrator for six to eight hours at 140 degrees Fahrenheit, after which they are blended and then ground into a fine powder. That powder gets mixed with polylactic acid pellets in a filament extruder which ultimately spits out spools of 3D-printer-ready filament.

This is when the transformed peels rejoin their fellow fruits. “Inside our big orange juicer, there’s one orange squeezer and three 3D printers,” Tassinari said. “This means that we were able to place the first and the last steps of our production process inside the machine.”

Feel the Peel will visit several Italian cities, so it’s not currently practical to fit the peel-to-filament process into the machine without making it too gargantuan for simple travel. “That said, I think, it is absolutely possible to integrate the whole process inside the machine: it is just a matter of time,” Tassinari said. 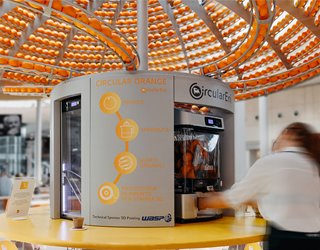 The machine contains one orange squeezer and three 3D printers. Image: CRA
The rind-made tumblers of Feel the Peel are not the juicer’s only marvel, nor the hardest to execute. Above the components that do the actual juicing, 1,500 oranges sit on a dome of tracks waiting to meet their demise. From this cap to the kiosk, eight spirals extend down to the juicer.

“Probably, the main challenge was to correctly design the spirals upon which the oranges roll from the ‘cap’ to the bottleneck,” Tassinari said. “Of course, given that oranges are not perfect spheres, it meant ending up with some that didn’t roll or got stuck on the spiral. Oranges vary in diameter and form, and their peel causes a lot of friction.”

To solve these problems Tassinari and his colleagues used the 3D modeling software Rhinoceros to model many possible citric scenarios, including a version with four spirals down to the juicer and one with just one spiral. “We were playing around with the height and the dimensions of the cap, to reach the perfect compromise between size, costs, and visual impact,” he said.

Tassinari is already hard at work on a second generation of Feel the Peel. The newer juicer may also be able to print fabric from the peels so enthusiasts can wear the waste to promote both orange juice and the circular economy. And, if all goes well, the production of the biofilament will be included on site.

“It is a challenging target, since we’ll face issues related to costs and dimensions,” Tassinari said. “But this is all part of the game!”