How Does Germany Do It?

How Does Germany Do It? 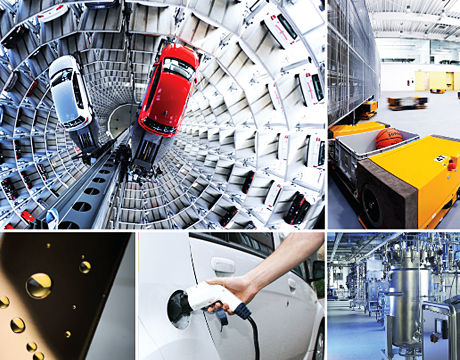 The 2008 financial crisis left most industrialized nations reeling. Yet Germany, especially its manufacturing sector, has done exceedingly well. Some argue that advanced economies are moving out of manufacturing, yet according to the Manufacturers Alliance for Productivity and Innovation, manufacturing accounts for nearly 21% of the German economy, compared with 13% for the United States and 12% for the United Kingdom. It generates many good jobs, even in such labor-intensive sectors as road vehicles, machinery, and electrical equipment. And Germany’s manufacturing performance is getting steadily better. German exports, primarily manufactured goods, rose 11% in 2010, to more than $1.3 trillion. While other industrialized nations have buckled under Asian competition, Germany has increased exports to China and the rest of Asia.

How is Germany doing this? How is a highly regulated, high-wage country with a strong currency increasing its share of the global market in the face of low-cost Asian competition?

While Germany has many large multinational companies like BMW, Volkswagen, and Siemens that turn in strong performance, its small and medium-size enterprises (SMEs) are an impressive source of strength, both as suppliers to multinational corporations and as exporters in their own right.

These SMEs generally avoid mass markets, but they dominate niche businesses. A 2007 study by the management consultant Bernd Venohr found that more than 1,130 German SMEs held either the number one or two position in the world market for their products, or the number one position in the European market. They are rarely the cheapest producers, yet the superior quality and performance of their products enables them to command premium prices and still boost exports. In the United States, such small and medium firms were hurt most by Chinese competition and the recession.

An important factor in German SME manufacturing success is the Fraunhofer-Gesellschaft (Fraunhofer Society), an independent nongovernmental organization that provides high-quality, short-term, affordable applied research that small and medium-size firms could not otherwise afford. Fraunhofer enables smaller manufacturers to continually upgrade their processes and products, and keep ahead of the competition.

A key feature of Fraunhofer-Gesellschaft is its scale; it is a $2.45-billion enterprise that operates more than 60 research institutes with more than 250 business focus areas and core competencies. The average institute employs between 300 and 400 people, though some are much larger. Overall, it has about 22,000 employees.

The society's mission is to conduct applied research with practical industrial value. It sees itself as a bridge between the latest university insights and industry-specific product and process improvements. It also generates a great deal of knowledge in its own laboratories.

Fraunhofer institutes undertake 6,000 to 8,000 projects annually. Most are small, short-term efforts. Projects rarely last longer than two years and focus on immediate, applicable results. Because Fraunhofer's funding has steadily grown over the years, it has been able work with its industry partners to generate the incremental improvements that translate into sustained competitive advantages.

While Fraunhofer is an independent nongovernmental entity, its distributed structure keeps it focused on practical results. Each Fraunhofer institute is linked with a German university. The institutes pick their own research fields, select their own projects, and decide how to handle project results.

More important, institutes balance their own budgets. That means generating contract research, which accounts for up to two thirds of the Fraunhofer budget. In addition to its scale and distribution structure, there are several other factors that account for Fraunhofer's success:

SMEs are often called the Mittelstand, or "middle class," but the two terms are not synonymous. The Mittelstand is a subset of German SMEs with certain distinct characteristics. They are typically family businesses located in small towns and rural areas. Their roots stretch back for many decades, often generations, and they plan for the very long term. As community leaders, their strong sense of social obligation makes them less likely to outsource or move offshore. Companies of the Mittelstand generally focus on niche products and markets, rather than go head to head with multinational giants. In many cases, continual incremental improvements in products and production methods have enabled them to dominate their chosen specialties.

In 2008, roughly one-third of Fraunhofer's R&D projects involved firms with fewer than 250 employees, while 43% were with companies with fewer than 1,000 employees. Without Fraunhofer, it seems that many of these firms would not have remained as competitive in global markets.

German manufacturers have realized many successes. Not only do their multinational companies thrive in an increasingly competitive global market, but their SMEs often dominate their market niches. Yet Germany's innovation system is not a perfect model. It has significant weaknesses, and its strengths may not translate easily to other cultures.

Fraunhofer's most glaring weakness arises from its greatest strength: Its laser-like focus on established industries has kept it from pioneering new technologies. There are no German counterparts for Intel, Apple, Google, Facebook, or the dozens of large bioscience companies spawned in the United States. While Fraunhofer spins off companies, most have remained small.

Fraunhofer established seven institutes in the United States and research subsidiaries in Chile, Austria, Portugal, and Italy. In some cases the model adapts well to the local innovation system, while in other cases it does not. It is worth keeping in mind, however, that Fraunhofer also takes a strategic approach to establishing institutes, funding them partly to learn about technology development in other parts of the world.

While Fraunhofer's approach does not seem to encourage radical, paradigm-shattering change, it nonetheless demonstrates that a high-cost, high-wage country can compete effectively in global markets through the systematic and continuous application of knowledge.

One source of German success is its concentrated efforts to support research relevant to small- and medium–size enterprises that are less likely to move production offshore. Through Fraunhofer, Germany offers skills, equipment, and services that those companies could not afford on their own. As a result, Germany has strengthened its export-oriented manufacturing base and retained good manufacturing jobs, even though its workers’ wages are among the highest in the world.

What are the implications for the United States? Perhaps the first lesson is that German firms are not “home alone.” They are supported by a dense network of institutes that help them make the incremental improvements that bring long-term commercial success. A second lesson is that this is seen as an important national mission, the way national defense is here in the United States. It requires a steady flow of resources, concentrat­ed effort, well-funded, well-led institutions, and a sense that these are investments that are important for the country’s future

There are certainly barriers to U.S. adoption of institu­tions to support a manufacturing ecosystem. Ever since the end of World War II, the United States has invested heavily in basic research in the belief that scientific advances would lead to new products and industries. For decades, U.S. research did just that. Yet today, many of those industries, such as wireless and microelectronics, have migrated overseas, taking jobs and innovators with them. The dominant post-war paradigm, namely that technologies invented here would naturally be produced here, has now eroded.

Germany's government has long supported the applica­tion of technology to manufacturing. It launched the na­tion's industrial revolution by investing in British machine tools, and closed the gap with the United Kingdom by encouraging applied research. Its ongoing support for large-scale practical industrial research for small and large companies has helped keep factories and jobs in Germany.

Despite these advantages, few in the United States would want to adapt a system that would not support the creation of such breakthrough industries as biotechnol­ogy, nanotechnology, and the Internet. Yet if we are to exploit the opportunities in new manufacturing technologies, the United States might consider adapting some of Fraunhofer's best practices to improve the flow of innovation to SMEs, which form the heart of America's manufacturing infrastructure.

One thing is clear. Countries that lose their manufacturing base risk losing their ability to innovate. Against the background of an economic environment which has seen the erosion and offshoring of traditional industries in the face of global competition, the German model, or some parts of it, warrants careful consideration. Above all, we have to pay attention to other countries’ policies and programs and learn from them, just as we have in the past.

This is an abridged version of the original article published in the November 2013 issue of Mechanical Engineering magazine.

Charles W. Wessner is a program director with the Board on Science, Technology, and Economic Policy at the National Research Council.

For Further Discussion
Fraunhofer enables smaller manufacturers to continually upgrade their processes and products, and keep ahead of the competition.