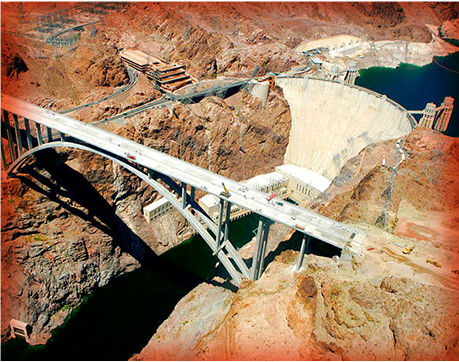 Splitting a pair of aces can double your chances of a winning blackjack hand on the Las Vegas Strip. But for tech-savvy visitors to the area, there’s a safer bet for a good time: a pair of technological aces just 35 miles to the southeast work together in an unbeatable sight-seeing hand for engineers.

There, on the shore of Lake Mead, the venerable Hoover Dam and its dazzling new companion, the Mike O’Callaghan-Pat Tillman Memorial Bridge, represent a century of high-stakes engineering and construction work in this 1,500-foot stretch of Colorado River. The proximity of these manmade marvels to major destinations in Nevada and Arizona make the site a must-see example of U.S. engineering on the grandest scale.

Americans have had 80 years to celebrate Hoover Dam’s high-rolling hydroelectric chutzpah. But the lesser-known O’Callaghan-Tillman Bridge is a new player at the public works poker table. Here’s the impressive story of its construction with this admittedly dealer’s-choice ranking of the bridge’s top 10 engineering facts.

Before the bridge, travelers between Arizona and Nevada on U.S. Route 93 crossed the Colorado River on the dam itself, via a crowded, white-knuckle two-lane road riddled with hairpin turns, high winds and zero visibility. What was recognized as a bad set-up 45 years ago became untenable by the 2000s, when the surging population growth and tourism caused hopeless congestion amid the ever-present road hazards. With added post-9/11 security concerns, officials from both states finally found the resources to bypass the dam with a straighter, safer highway with a new Colorado River bridge crossing as its central engineering challenge.

Construction began in 2005 and the officials cut the ribbon in October 2010, coinciding with the 75th anniversary of Hoover Dam. Although bureaucratic and contractual delays and a major equipment mishap added years to the timeline, the project met its $240-million budget -- $114 million of which was spent on the bridge itself.

The bridge incorporates 30,000 cubic yards of concrete and 16 million pounds of steel.

A series of wildlife-only over- and underpasses protect the nation’s largest herd of endangered desert bighorn sheep from the heavier volume and faster speed of traffic on the modernized highway. Highway officials used radio collars and GPS to track the migratory patterns of sheep and other wildlife to identify optimal crossing points.

Construction crews from Obayashi Corp. (San Francisco, CA) and PSM Construction USA (Brisbane, CA) teamed up on a novel system of heavy cables stretched across the canyon to put the pieces of the bridge together. Two 330-foot towers suspended each end of the 2,500-foot cableway, and a custom remote-controlled trolley system traveled on the 3-in.-diameter cables to transport, hoist and position individual concrete bridge sections.

The bridge was the first concrete-steel arch composite bridge built in the United States, and its twin-ribbed arch is the widest of its kind in the Western Hemisphere. Forming a 1,060-foot-long, 277-foot-deep arch, the two ribs are joined laterally by Vierendeel steel trusses that add seismic protection. Each rib comprises more than 50 sections of concrete, each measuring 24 to 25 feet. Eight concrete vertical piers elevate the bridge deck above the arch structure, and a total of 36 steel girders weighing in at 50 short tons hold the whole thing up.

Despite the accidental death of one worker during construction, the complex project maintained a strong safety record. Pedestrian suicides, however, pose a growing problem to bridge officials, who are evaluating design modifications to prevent future tragedies.

The total length of the bridge is 1,905 feet, making it the longest single-arch bridge in North America. A dedicated pedestrian lane on the north side provides visitors with the only way to see Hoover Dam from the bridge itself as well as an array of interpretive plaques about the project and its environment.

At 880 feet over the Colorado River, it is the second-highest bridge in the United States and the highest concrete-arch bridge anywhere.

As a two-state project, the bridge honors icons of public service selected by Nevada and Arizona. Both were admired as heroes of the armed conflicts of their times, and for placing public welfare over their personal gain. Donal Neil “Mike” O’Callaghan was a decorated Korean War veteran who lost the partial use of a leg in battle. He served two terms as Nevada’s popular governor from 1971-1979 and declined to run for a third, opting instead for a career in newspaper journalism and philanthropy. Patrick Daniel Tillman gained fame in football, first at Arizona State University and later with the Arizona Cardinals. The story of his decision to abandon a lucrative athletics career to enlist in the U.S. Army in the wake of the 9/11 attacks, and his 2004 death in Afghanistan at age 27, are indelibly linked with this tumultuous period in American history.

For Further Discussion
The total length of the bridge is 1,905 feet, making it the longest single-arch bridge in North America.