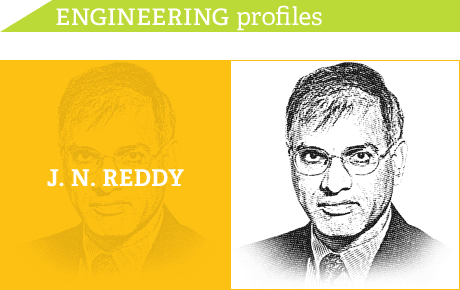 An analytical thinker who excelled in mathematics, J.N. Reddy decided to pursue engineering on the advice of his teacher in Hyderabad, India, in 1962. A passionate teacher and researcher, Dr. Reddy views mathematics as the language of engineers and believes his role is to use the knowledge he has to serve the community. In his words, "That which is given is not lost."

Dr. Reddy, a distinguished professor, regents professor, and the holder of the Oscar S. Wyatt Endowed Chair in the department of mechanical engineering at Texas A&M University, College Station, is recognized with Honorary Membership for distinctive and pioneering contributions to research and education in applied and computational mechanics through the development of refined theories and as the author of well-received books on composite materials, continuum and applied mechanics, and computational methods.

Dr. Reddy taught at the University of Oklahoma, Norman, OK (1975-80), and Virginia Polytechnic Institute and State University, Blacksburg, VA (1980-92). He was a research scientist at Lockheed Missiles and Space (1974-75) following his postdoctoral fellowship at the Texas Institute for Computational Mechanics at the University of Texas, Austin (1973-74).

His research interests include mathematical formulation and analysis of problems in applied mechanics including solid and structural mechanics, computational fluid mechanics, computational heat transfer, biomechanics, and the development of mathematical models and computational schemes based on the finite element method of problems in composite materials and structures, plates and shells, fluid dynamics, and nano and biological systems. His finite element models, in parts, have been implemented into commercial software including Abaqus, NISA, and Hyperform.

Dr. Reddy is the author of more than 450 journal papers and 17 books, many of which have been adopted as textbooks. He is one of only a few researchers in engineering recognized by Thomson Reuters as a highly cited researcher, with over 10,000 citations and an h-index of 49. His editorial board service includes over two dozen journals, and he is the editor in chief of three other journals. He has delivered over 100 lectures at conferences around the world.

Dr. Reddy views mathematics as the language of engineers and believes his role is to use the knowledge he has to serve the community.