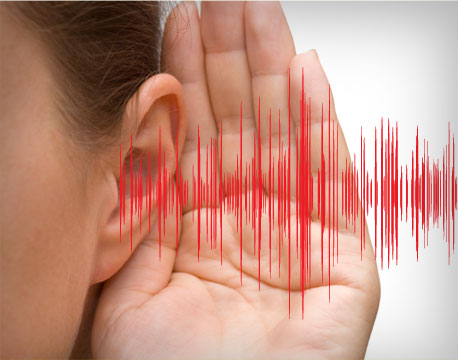 You continue to see hearing aids less and less—and that is part of the point.

“Ten years ago, the design was limited and bulky,” says Sid Higgins, principal mechanical engineer, technology development, Starkey Hearing Technologies, Eden Prairie, MN. “The encasing electronics had its bulky sharp corners, were uncomfortable to wear, and weren’t environmentally friendly. Water, dust, wax protection, so many things built up. You also had to press and flip through [the hearing aid] to get your desired setting.”

Today, you can command the machine audibly and it goes to a flexible circuit board. And the size? It can go down to a kidney bean or smaller. There are two bends in the ear canal and it can sit just off the tympanic membrane, Higgins says, going up to 60 decibels if needed. One of the drivers inside is the feedback canceller, and you can now get the microphone and receiver much closer together. Also, how it’s held together has improved. You no longer have a dependency on crosspins, folding parts together, or screws locking. More reliable use comes through improvements such as snap fits, creating a more durable mechanism.

Nanotechnology has also allowed strides in areas such as repelling waters and oils that occur. “A hearing aid is in a hostile environment in the body. The ear wants to reject anything that is foreign,” Higgins says. The coating to thwart this is part of a HydroShield that extends to polymers.

The shaping of the hearing aid itself is now done through 3D model manufacturing. An emerald mold is taken at an audiologist’s office and they scan it to send it in digitally for shaping or they can directly send the mold.

The challenge is not just listening to other people but being connected. Advances in wireless hearing devices have changed the engagement with entertainment. “Our users want to be able to watch TV with everybody and not drive everyone out of the room because of the volume of the TV,” Higgins says. “Wireless allows you to do that, they’re not drawing attention to themselves anymore. As far as cell phones, in some cases it looks like something out of James Bond. You can verbally answer the phone and the hearing aid picks up their voice and they can control conversation.”

The future will see companies continuing to improve what they’ve already started. For the size, Brian Dobson, manager of mechanical engineering, says chip size still will be a strong factor. Areas such as the telephone also have a ways to go. Those with hearing aids still need to deal with an odd angle, the phone above the ear. Rechargeables could also be more on the scene but for now, there is still a requirement of access to a battery door on the device.

Most of us don’t even think about hearing. The engineering community is clearly working towards hearing aid customers feeling the same. Eric Butterman is an independent writer.

Our users want to be able to watch TV with everybody and not drive everyone out of the room because of the volume of the TV. Wireless allows you to do that.Sid Higgins, Starkey Hearing Technologies