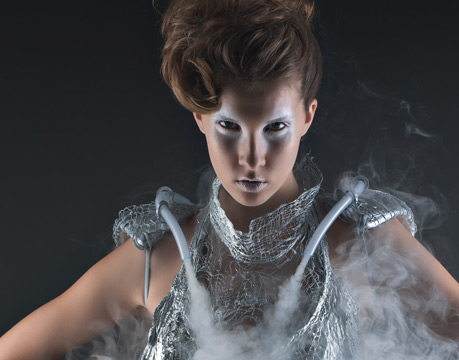 Technology is taking over and fashion is certainly no exception. Wearable technology can be found in everything from wristbands that monitor health to computing glasses to shoes that double as a vacuum cleaner. Designers are finding more and more ways to incorporate technology into clothing, and even evening wear is getting revamped.

Take, for example, CuteCircuit, a fashion house in London that has been experimenting with wearable technologies since their launch in 2004. All of their designs aim to express emotion and interaction with others through their clothing, according to Creative Director Francesca Rosella. They design all aspects of their garments, especially their signature colorful, butterfly circuits, in-house and then get them manufactured.

When designing the “M Dress,” Rosella had two major problems in mind. She hated having to take a small purse just for her cellphone during a night out and kept missing calls because her phone was away in that purse. The solution? Create a dress that has your cellphone built into it.

Made of silk jersey, the M-Dress can connect to any phone with a removable SIM card. The SIM card is inserted into a slot hidden under the label of the dress. This allows the wearer to use the same phone number as their regular cellphone. The long-sleeved dress has a microphone, speaker, and sensor that detects hand motions built into the sleeves. To answer a call, wearers simply bring their hand up to their ear. Releasing their hand downwards will hang up the call. This gesture recognition software allows the dress to work in an intuitive, comfortable way.

To prevent answering unwanted calls by motions such as dancing or scratching your head, the embedded software calculates a specific speed and hand motion that was tested as typical of answering calls.

“The thing that is very nice is that we used a Quad Band module to make the dress work and you can get your phone calls from all over the world,” says Rosella. The dress has tiny circuits that are connected with nylon fibers coated in copper. “They’re very soft but at the same time they conduct electricity,” she says.

And, just like your cellphone, if you want to turn it off, you just hold down the power button.

Waiting by the bar for a drink might just become a thing of the past. The DareDroid 2.0 is a cocktail dress that actually makes cocktails. You just have to play a game of Truth or Dare first.

This robot dress is made up of an electronic control system and a liquid-dispensing system. An infrared range sensor measures the proximity of people to the wearer of the dress. Once a person is detected, the dress can dispense a non-alcoholic drink. If a person gets too close to the wearer, invading the wearer’s personal space, the dress shuts down.

To actually obtain an alcoholic drink, a game of Truth or Dare operated by a smart phone must be played. “There is no electronic connection between the phone and the rest of the dress, so the decision to pour a drink has to be made by a human based on the Truth or Dare performance,” says Marius Kintel, the software engineer behind the dress.

The control system consists of infrared range sensors, pushbuttons to activate dispensing, and LEDs that visually show a person’s proximity to the wearer. “The system is controlled by an embedded microcontroller. We developed the software ourselves. It's written in C$ and runs on the Arduino platform which is embedded into the back piece, “says Kintel.

Liquid is stored inside elastomeric pumps that pressurize hoses to transport liquid. “Dispensing is performed using solenoid valves. We used pneumatic control valves from Festo, due to their small size and low power requirements. These valves are designed for dried air, not liquids, but our tests showed that it's possible to use them for liquids over short periods of time. Eventually, they rust,” says Kintel.

The concept behind Daredroid 2.0, an international collaboration between Anouk Wipprecht, a fashion designer, Jane Tingley, an artist, and Kintel, aims to break social norms and explore public behavior.

Ever wish you could just disappear out of an uncomfortable conversation? The Smoke Dress is no invisibility cloak, but it will deploy a smoke screen around you when the situation calls for it.

Using a battery-operated fog machine that vaporizes glycol developed by Look Solutions and an Arduino microprocessor, the wearer can control the smoke with the touch of a button.

To cool down the smoke but not condense too much of it, designers Wipprecht and Aduen Darriba incorporated a Peltier element to cool down the air quickly.

“The fog machine starts vaporizing the glycol. This process demands the attraction of air. The air that is attracted is pulled through a Peltier cooling element, and the cool air is used to make fog,” says Darriba. “The fog is fed through tubing around the body and is extruded around the shoulder or waist area.”

If you’re curious how much carbon dioxide is in the air around you, this dress will show you.

Created by Diffus Design, the Climate Dress is made of conductive embroidery, hundreds of LED lights, a CO2 sensor, and an Arduino Lilypad microprocessor. The sensor detects CO2 levels in the air and transmits this data to the LED lights which “visualize the level of CO2 in the nearby surroundings and are powered through the embroidery,” according to concept designer Michel Guglielmi, who collaborated with R&D electrical engineers Jesper Nielsen and Jerker Hammarbeg. “The embroidery becomes functional, conveying electricity and computer information and thereby gives "power to the dress.”

Diverse light patterns are transmitted through the dress after CO2 levels are sensed. These patterns can vary from “slow, regular light pulsations to short and hectic,” Guglielmi says.

Guglielmi and his collaborators, including digital artist Hanne Johannesen, decided to use a CO2 sensor to connect an individual with their environment through clothing.

“Wearables morphing into street fashion is here to stay because computing technology is now becoming ubiquitous,” says Guglielmi. “The level of miniaturization and sophistication of technologies makes them unavoidable to any garment in the years to come.”

Ariana Marini is an independent writer.

For Further Discussion
The level of miniaturization and sophistication of technologies makes them unavoidable to any garment in the years to come.Michel Guglielmi, Diffus Design