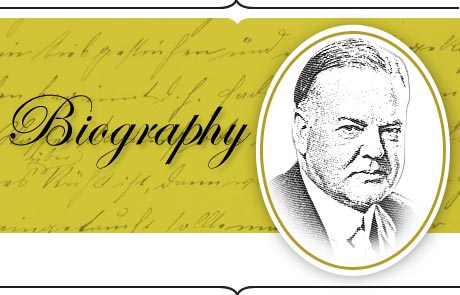 Herbert Hoover was the first president to have a telephone on his desk. Though it might be a stretch to call someone of his generation an "early adopter," the "Great Engineer," whose presidency fell prey to the Crash of 1929, successfully battled famine during two world wars using every tool at his disposal.

Born on August 10, 1874, in West Branch, Iowa, Hoover lost his father at age six, and his mother, a Quaker minister, died three years later, but not before instilling within her son the Quaker values that would inform both his professional and political careers: pacifism, a devotion to reason, charity, and service. Hoover went to live with relatives in Oregon and attended the Friends Pacific Academy. After graduation he worked at the Oregon Land Company and studied business at night.

This early training later served Hoover well, once his interest in math and the urgings of a mining engineer, led him to Stanford University, where he juggled geology courses with summer stints working for the U.S. Geological Survey. He graduated with a degree in geology in 1895, and after mining jobs in California and New Mexico, went in 1897 to mine gold in West Australia for the British firm Bewick, Moreing Company. His engineering and technical problem-solving skills propelled him into management, and after three years he was asked to take over the firm's interests in China.

Stopping home in the U.S. to marry his Stanford sweetheart, Lou Henry, Hoover and his wife set sail for China, where his mining expertise led to his promotion to junior partner. But it was the role he played during the Chinese Boxer Rebellion of 1900 that launched him into a philanthropic career that would be his most satisfying.

When the uprising, an insurrection to cleanse China of all that was foreign, trapped the Hoovers and hundreds of other foreigners in Tianjin, Hoover ran the distribution of food and water as well as the building of barricades. The siege lasted roughly two months until foreign relief forces arrived and the Hoovers escaped back to London.

Hoover returned to Bewick and Moerining's and stayed there until 1908 when he formed his own engineering firm. The business flourished thanks to innovative extraction techniques used in the silver, lead, and zinc mines of New South Wales, Burma, and Russia. By the time World War I broke out, Hoover's net worth, estimated at $4 million, had him ready to give back.

The opportunity to serve, core to his Quaker ideals, came in 1914, when World War I broke out and thousands of Americans were stranded in London. Tapped by the U.S. Embassy, Hoover organized food and shelter for the expats and loans to fund their trips home. The success of this effort won Hoover his next role, leading the relief effort mounted to feed the Belgians, who, while neutral in the conflict, were living under German occupation. Funded entirely by donations of over $1 billion, the Commission for Relief of Belgium kept some 11 million people from starving, an accomplishment he termed, "The greatest charity the world has ever seen."

Once the U.S. entered the war, Hoover was deployed by President Woodrow Wilson to run the United States Food Administration. He initiated a food conservation campaign to convince Americans to do their part by rationing their bread and sugar. The food surplus fed the American armies and, after the war, was used by the Hoover-run American Relief Administration to feed people throughout Europe—even the Germans and Russian Bolsheviks. "Twenty million people are starving. Whatever their politics, they shall be fed," he said of the controversial aid, espousing a Quaker social activism that earned him inclusion on The New York Times' "Ten Most Important Living Americans." Hoover's relief work on behalf of the Belgians and after the War also won him the inaugural Hoover Medal, funded by Conrad N. Lauer, "to recognize outstanding civic or humanitarian service rendered by a member of the profession."

A career in politics seemed inevitable, as the engineer-turned-global problem solver was next made Commerce Secretary by Warren G. Harding in 1920 and again by his successor Calvin Coolidge. But his focus on eliminating waste and inefficiency in business bore the mark of an engineer, particularly his push for standardization of consumer products from paper to nuts and bolts and window frames. His work to expand U.S. international trade—by opening Commerce Department offices abroad—made for a strong platform for his eventual 1928 presidential run.

Hoover won, but sadly, the times and over-speculation in the stock market—fueled by ungoverned private banking practices he abhorred—conspired against him. In October 1929 after his March inauguration, the stock market crashed, and, slow to provide federal aid to the millions Americans who lost their jobs and homes in the ensuing depression, Hoover was blamed, and a pall fell over his presidency that obscured his achievements. He is credited with the engineering of the Grand Coulee Dam and the San Francisco Bay Bridge as well as many other public works projects. Being the good Quaker, he strongly advocated for international disarmament, sought prison reform, and appointed two Quakers to run the Bureau of Indian Affairs, in part, to improve schools and health care. Still when Hoover ran for re-election against the Democrat Franklin Delano Roosevelt in 1932, he lost in every state but six.

Ironically, it took the guns of World War II to rehabilitate him. Once again he organized famine relief for Belgium, Holland, Finland, and Poland. And at President Harry S Truman's request, he created a massive food program that kept several hundred million Europeans from starving.

Back in the political establishment's good graces, Hoover was tasked in 1947 with reviewing federal government operations for inefficiencies and redundancy. Many of the Hoover Commission's 280 recommendations were taken, prompting President Eisenhower in 1953 to ask him to undertake an analysis of federal government policies. Hoover died on October 20, 1964, at 90, having summed up his service to the people of the world for half a century: "Being a politician is a poor profession. Being a public servant is a noble one."

Being a politician is a poor profession. Being a public servant is a noble one.President Herbert Hoover