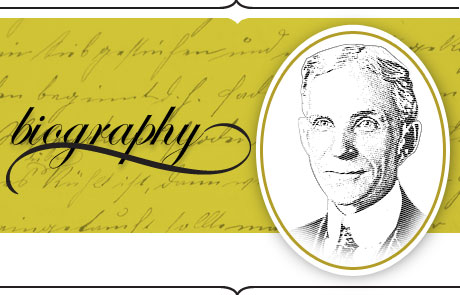 Henry Ford (1863 – 1947), one of the most influential industrialists in history, ushered in the era of mass-production at the turn of the century, making the automobile available to the middle and working classes. In doing so, he shaped the culture of America forever.

Ford was born on July 30, 1863, at his family's prosperous farm in Dearborn, MI. During his early years, Ford demonstrated very little interest in farming and preferred instead to tinker with mechanical devices. At age 16, Ford left the farm to work in nearby Detroit as an apprentice machinist, a job he held for three years before returning to Dearborn. He married Clara Bryant in 1888 and supported himself and his wife by running a sawmill. From 1891 to 1899, he worked as a mechanical engineer with the Edison Illuminating Company in Detroit.

In his free time, Ford began testing experimental gasoline engine designs. By 1893, he had built a small one-cylinder gasoline combustion engine. Three years later he invented the Quadricycle the first "horseless carriage." The Quadricycle had four wire wheels, was steered by a boat-like tiller, and propelled by an ethanol-powered engine with two forward speeds and no reverse. The two-cylinder engine generated 4 hp and a top speed of 20 mph.

Toward the turn of the century, Ford's interest turned to automobiles, and by 1899 he had raised enough money to start his own company, the Detroit Automobile Company. Ford spent $86,000 in seed money, a fortune at the time, and designed his second vehicle in 1900, a delivery wagon. However, his investors saw no profits forthcoming from the company and withdrew. After the collapse of the Detroit Automobile Company, with the help of new backers, Ford formed the Henry Ford Company, but this effort failed as well, amid significant competition by as many as 60 aspiring automakers in the U.S. at the time. His final effort began with the The Ford Motor Company in 1903 and he rolled out his first car, the Model A, in July of that year.

The Ford Motor Company was a success even though just five weeks after incorporation the Association of Licensed Automobile Manufacturers threatened to put Ford out of business because he was not a licensed manufacturer. The group had acquired the rights to an automobile patent granted to inventor/patent attorney George Baldwin Selden, and was collecting a licensing fee for each vehicle manufactured. Ford fought the claim, and although he lost the initial case in 1909, he won an appeal in 1911 and thus opened the doors for the rapid growth of the automobile industry. The fight and the victory had made Ford a popular hero.

Ford dreamed of producing a reasonably priced, reliable automobile accessible to everyone. He once proclaimed, "I will build a motor car for the great multitude." His dream came true when he launched the Model T in October of 1908. In the 19 years of the Model T's existence, he sold more than 15 million vehicles in the U.S., Canada, and Great Britain, a total amounting to half of the automobile output of the world at the time.

Ford's greatest contribution to the automobile industry was the development of the moving assembly line. After much experimentation, Ford implemented the system in 1913 at its new plant in Highland Park, MI. The success of the new manufacturing technique was contingent upon the delivery of parts, subassemblies, and assemblies with precise timing to a constantly moving main assembly line. The new technique allowed individual workers to stay in one place and perform the same task repeatedly on multiple vehicles that passed by them.

The line proved tremendously efficient, helping the company far surpass the production levels of their competitors—and making the vehicles more affordable. Previously, it took 14 hours to assemble a Model T car. The assembly line approach reduced this to 1 hour and 33 minutes. With higher manufacturing efficiency, Ford could lower the cost of each car and reduce the selling price from $1,000 to $360. In 1914, Ford began paying his employees $5 a day, nearly twice as much as the wages offered by other auto manufacturers. He cut the work day down to eight hours, enabling the company to employ three shifts around the clock.

Ford's vision of the automobile as the ordinary man's utility rather than the rich man's luxury ushered in the so-called "Motor Age" that changed the economic and social character of the country. The new-found mobility of the masses enabled cities to spread outward and spurred the creation of suburbs and housing developments all connected by a developing highway system.

Over the years, Ford suffered through problems with employees, government regulations, unions, and competition, mostly attributed to his opinionated, authoritative personality. He was slowed by a stroke in 1938 and died on April 7, 1947 at his home in Dearborn.

Ford's vision of the automobile as the ordinary man's utility rather than the rich man's luxury ushered in the so-called "Motor Age" that changed the economic and social character of the country.

Article
Top 5 Podcasts of 2022
Listen to the favorite podcasts of 2022, as selected by the editors of ASME. Highlights include discussion on electric vehicles and the engineering workforce.