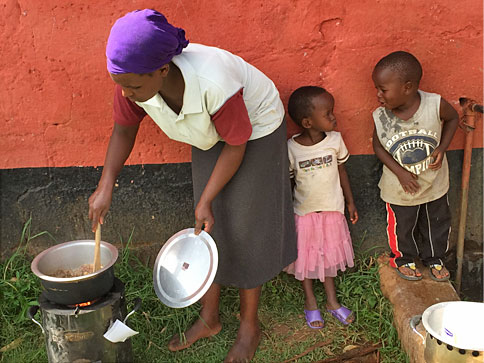 A woman in Africa using a cookstove designed by Burn Design Lab. Image: University of Washington

There are few things more comforting than the smell of something good cooking on the stove—the Food Network has even built a network on it. A whiff of ingredients creates images of tastes, sharing the experiences of the day around the table, and, of course, going for seconds.

But Garrett Allawatt, a Ph.D. student in mechanical engineering at the University of Washington, is part of a team trying to stop cooking from becoming deadly, as it can be in certain areas of the world. Cookstoves in many developing countries emit particles that can ruin human health, particularly that of women and children.

“One of the parameters of the project I’ve been a part of was a target market in eastern Africa, more specifically Kenya,” Allawatt explains. “The World Health Organization has put cookstoves as a top ten killer in the world. The lower respiratory situation is extremely deadly, and it even disproportionately affects women and children because they are, on average, spending more of the time in the household.”

They first wanted to reduce soot coming out of the stove using the Edisonian technique of applying heat to the wood, Allawatt says. “You deprive wood in hydrolysis of oxygen and need secondary air for a secondary flame combustion,” he says. “We started with taking a normal stove mad box, then poked holes in it and blocked air coming through a speed tunnel and just allowed air coming from underneath the stove. From doing this, we saw a drastic reduction in particulate. We would even have blue flames, which you don’t associate with wood fire and advanced this technique into the stove, which has air enter through two places. One is under the fire, and being below air, this air is restricted to maybe 10% of the amount of air that enters the stove. This is a primary flame without igniting everything in one place.”

They also invested in a continuously monitoring particulate measuring device, a tempered elect-operating microbalance. “It’s pretty much a cantilever that is migrating when you’re talking about certain frequencies and you can actually figure how much mass is on the end of it,” he explains.

The stove has reached Tier 4 safety metrics in all categories, he says. “That’s a level to be proud of and we’re using much, much less particulate matter than the average stove they’re using,” he says. “It’s a world of difference. People should be able to cook their food and consider it contributing to their health instead of destroying it. We hope to provide some important relief.”

For Further Discussion
People should be able to cook their food and consider it contributing to their health instead of destroying it. We hope to provide some important relief.Garrett Allawatt, University of Washington