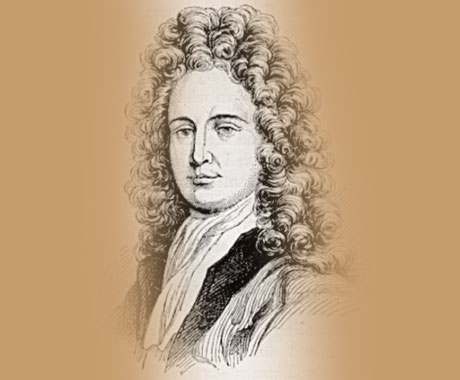 Thomas Savery: He tried to replace horses with the energy of fire, but his engine couldn't lift high enough.

Heat, Work, and the First Law of Thermodynamics

Marks' Practical Handbook for Mechanical Engineers calls the first law of thermodynamics—that energy can neither be created nor destroyed—"one of the very important laws of nature."

As an engineering science, thermodynamics has evolved piecemeal over many years and with contributions from many investigators. A basic form of the first law for simple systems states that the increase in the internal energy of a system is equal to the quantity of heat transferred to the system reduced by the quantity of work done by the system:

This law is a result of the famous experiments James Joule conducted in the 1840s that identified heat as a form of energy having a unique equivalence to work. For generations before Joule, however, heat remained an enigma for scientists.

In 1698 Thomas Savery designed the first engine that continuously converted heat from fire into useful work. His goal was to create a machine that would be more effective at removing water from deep mines than using horses hitched to a turnstile.

His engine relied on a coal-fired steam boiler connected to a cylinder that was double-valved to a suction pipe and a discharge pipe. When the cylinder was filled with steam, it was down-washed with cold water, causing the steam to condense and form a partial vacuum, drawing water up the suction pipe. The steam supply valve was then opened and the boiler pressure forced the water up the discharge pipe for ground level disposal.

In 1712 Savery partnered with Thomas Newcomen to build an advanced version with a piston between the atmospheric air and the steam, the piston connected to one end of a rocking beam. The other end of the beam was attached to rods that went down into the mine to operate the water pumps. A second innovation was to inject cold water directly into the steam to condense it, which greatly sped up the process.

While restoring a Newcomen engine at the University of Scotland in 1765, James Watt discovered about 80 percent of the steam was wasted by premature condensation on the cold walls of the cylinder. To reduce this effect, he added a small condensing chamber adjacent to the main cylinder, thus letting the walls remain at a high temperature. He then converted the reciprocating motion of the beam to rotary motion, making the engines more compatible with mills and factories.

Watt also worked with Joseph Black, a professor of physical chemistry at the University of Scotland, to determining specific heats and latent heats for many compounds. This involved defining the British thermal unit (Btu) as the amount of heat needed to raise the temperature of one pound of water one degree Fahrenheit.

In the late 1700s Benjamin Thompson conducted experiments on gunpowder and later supervised a cannon boring factory. During cannon boring he noticed that the brass chips that left the barrel were hotter if the cutting tool was dull than if it was sharp. By collecting them in a pail of water as a crude calorimeter he could calculate the thermal effect, but was unable to instrument the cutting tool to measure the work input.

In 1840 James Joule discovered what is universally known today as Joule's Law: E = I2R where E is the rate at which electric energy is dissipated when an electric current passes through a resistance. He later devised a simple apparatus for determining the equivalence of heat and work that consisted of a well-insulated rigid chamber containing a viscous fluid and fitted with a rotating propeller. He observed that for a given fluid, a definite amount of work expended always caused a definite rise in temperature of the fluid. In modern terms, he discovered the property internal energy, U.

Joule's experiment established heat as transformable energy. Newton’s mathematical expression of the first law is the result of Joule's work with the usual sign conventions and with all terms expressed in the same units. It is essentially a statement of the conservation of all forms of energy.

The world is rapidly approaching a crisis in the field of energy, as worldwide demand for fossil fuels continues to stress a diminishing supply. This impending shortfall has led to numerous investigations into alternate sources of energy, such as solar, geothermal, and biological, each having serious political implications when extended to an effective scale. Since all these approaches must satisfy the laws of thermodynamics, perhaps better communications between policy-makers and thermodynamicists would result in more rapid progress and better solutions.

[Adapted from “Heat, Work, and the First Law” by Howard W. Butler, for Mechanical Engineering, March 2008.]

In 1698, Thomas Savery designed the first engine that continuously converted heat from fire into useful work.