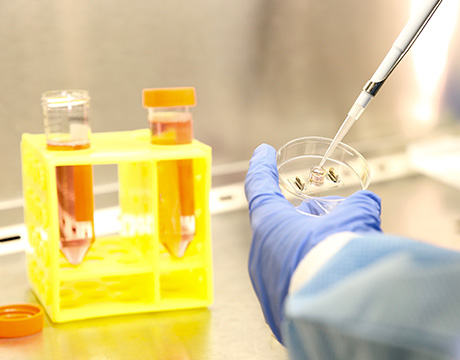 Many promising new drugs never make it to human trials. They may damage the heartand researchers can’t take that risk.

In response, several labs have created “heart-on-a-chip” technology that can cut the length of new drug trials and reduce animal testing. The chips are essentially a very small model of the human heart on an engineered chip.

In May, for example, Lawrence Livermore National Laboratory in Livermore, CA, unveiled its own heart-on-a-chip. Researchers recorded electrical signals and cellular beating from normal human heart cells grown on a multi-electrode array developed at the lab.

The platform allows researchers to do high-throughput screening of pharmaceutical drugs and predict their effects on the heart, says principal investigator Elizabeth Wheeler. On that chip, drug researchers can measure the effects of drug exposure to the heart by recording how the signals, the heartbeat, and the cells change in response to medicine introduced into the array.

To create the heart-on-a-chip, researchers introduced human cardiac cells into a culture on the engineered chip. They let them grow for around nine days. The cells spontaneously grew into a two-dimensional heart tissue that contracts or starts to beat after two days in culture, Wheeler says. Her team then exposed the tissue to norepinephrine, a stimulant drug used to treat low blood pressure and heart failure. Both the electrical signal and the beating increased in the cells, mimicking what would have happened to a human heart after a person ingested the drug.

The national laboratory’s chip technology isn’t the first of its kind, though it’s the first heart-on-a-chip array that can map both the electrophysiology and the contraction frequency of the cells, Wheeler says.

The ability to record those two functions is useful for pharmaceutical companies because they could alert drug manufacturers to cardiac problems caused by a drug early in the process before testing reaches the clinical trial stage, she adds.

Cardiotoxicity is a frequent side effect of many new drugs and often contributes to their ultimate failure to gain FDA approval. Other frequently prescribed drugs, such as chemotherapy agents, are also known to be cardiotoxic. Research using the heart chip could provide experimental information about how the drugs work. With that information, new compounds could be designed that avoid known issues, says Fang Qian, a Lawrence Livermore staff scientist who also worked on the array.

“Heart problems can be caused by a lot of different reasons,” Qian says. “It could be due to abnormal electrical signal conduction throughout the heart, such as arrhythmia, or weakened contraction force of heart muscles, like cardiomyopathy. Or both.”

“A platform that only reads out a single function cannot tell us exactly what is wrong.” Qian adds.

Kevin Healy, a bioengineering professor at the University of California at Berkeley, believes these chip platforms will move beyond preliminary drug testing in coming years. “Ultimately, these chips could replace the use of animals to screen drugs for safety and efficacy,” Healy says.

In early 2015, his team demonstrated a network of pulsating cardiac muscle cells housed in an inch-long silicone device that modeled human heart tissue. They tested its viability as a drug-screening tool by testing it with cardiovascular medications.

And in October of 2016, Harvard University researchers created what they said was the first entirely 3D printed organ-on-a-chip that includes integrated sensing.

His team’s approach may one day allow researchers to rapidly design organs-on-chips that match the properties of a specific disease or even an individual patient’s cells, Lind says.

Lawrence Livermore scientists caution that more testing is needed before heart-on-a-chip platforms act as stand-ins for humans during drug trials. But they’re optimistic about the technology’s future.

“With high-throughput, high-content screening you could test many drugs at the same time and get a lot of data at once,” Qian says. “It’s staggering how much money and time is involved in getting drugs to the market. This could speed up the process.”

For Further Discussion
It’s staggering how much money and time is involved in getting drugs to the market. This could speed up the process.Prof. Fang Qian, Lawrence Livermore Lab