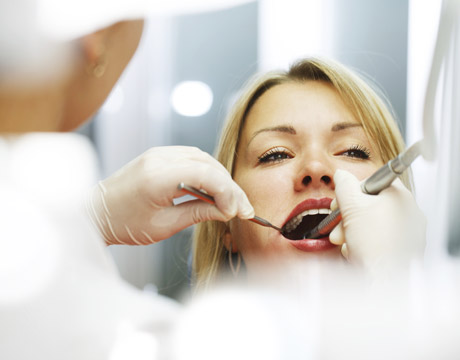 What could be less fun than hearing those four little words: “You need a filling.” Well, it could be worse. “You need a crown” and “You need a root canal” are also cringe worthy. But if a group of collaborators have their way, a patient might be hearing all three a lot less often in the future.

“We’re talking about fillings and that means billions of teeth,” says Jay Kruzic, professor in the school of mechanical, industrial and manufacturing engineering at Oregon State University. And that’s where bioactive glass can come in, he says. “Bioactive glass has mineralization to defend against tooth and bone decay and has some great possibilities,” he says.

In a collaboration that also included the dental school at the Oregon Health and Science University and the dental school at Midwestern University, the dental experts in the group fabricated the materials and had access to dental clinics where there were tooth samples to test out, he says. “In terms of the material we’re making, basically, the composites that are normally used are glass-filled polymer composite and we’re taking some of that inert glass and replacing it with bioactive glass,” he says.

Bioactive glass is based on three basic components. Theirs were silicon oxide, calcium oxide, and phosphorous oxide. Calcium and phosphorous, Kruzic reminds, are actually in your bones and teeth.

They came up with a test methodology to simulate tooth decay and simulated tooth filling under mechanical loading, he says. “We were looking at the bacteria that like to attack assays between the tooth and the tooth filling so we created an experiment where we put a normal tooth filling in there and the bacteria did its work,” Kruzic says. “And when we replaced the traditional material with bioactive glass material, it slowed down considerably.”

The system built for testing samples came from designing and fabricating bioreactors, which had to meet dimensional requirements for the mechanical testing.

Kruzic found fun crossovers with his work in this experience. “I have a background in material science and mechanical engineering and you end up doing a lot of fatigue testing: testing of material over time and cycling loads. We’re interested in putting materials in certain environments but here we wanted an environment that was alive," he says. "We wanted living bacteria in the environment and that was a first for me. And we needed a sterilized environment. When you get into the biological realm, it’s just not as simple as a normal mechanical engineering device.”

For the future, the team is looking at some of the adhesives that go into bonding a filling to a tooth and changing the composite formulations, he says. “I think it’s about 60% of all tooth fillings that go in are to replace tooth fillings that have failed,” he says. “We’re not claiming we’ll make the invincible tooth filling, but every time you get one replaced the tooth might break or you could maybe be looking at a root canal. If you extend the life of a filling some years, it can have a positive effect, and maybe save some money.”

Most people who’ve spent time in the dental chair would probably smile at that possibility.

For Further Discussion
If you extend the life of a filling some years, it can have a positive effect, and maybe save some money.Prof. Jay Kruzic, Oregon State University