Having a (Bowling) Ball

Having a (Bowling) Ball 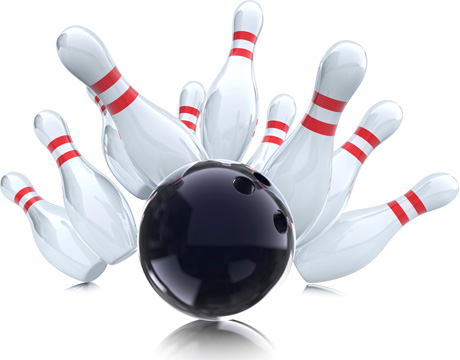 Many things can be passed down from father to son: baseball cards, fishing trips, family stories. But for the Hicklands, it involved throwing a bowling ball down a lane, and Ronald Hickland Jr., mechanical engineer and director of product design for Ebonite International, Hopkinsville, KY, knew from a very early age that he could make a better one.

"I also met a bowling ball designer when I was 15.Andthat helped spark my interest in going down this path," he says. "I was writing a scholarship paper and it was all about doing this for a living." Arriving at Purdue University, he knew he'd be in engineering but had to decide between chemical and mechanical. "I realized it was the inner workings of the ball that I wanted to work on, so mechanical won," he says.

And he won a little himself. You see, not only did he eventually become director of product design for Ebonite International, Hickland turned pro in the sport. Many perfect games and prize money checks later, he knew the game that much better.

A Design for Success

So where does a designer even start? "It begins with the brand," he says. "Brand managers will tell me what they want the ball to do for their client and my job is to piece it together for performance. They may say, 'I have a bowling ball that does this' and I'll say, "I have to get you a new core shape' or, with cover stocks [the cover of the ball], there are a myriad of options for performance. If it's a new cover stock, you will go to a computer and design a new shape based on numerical properties that have a certain kind of performance. For shape, you play along with the densities and how it will roll down the lane. We have a group of chemists that have many cover stock options to go on the ball."

Next comes the testing. "In the testing and evaluation phase, we have a systematic approach that I developed from scratch," he says. "That process allows us to take subjective information and make it quantifiable. We actually have a testing facility where we have sensors on a lane that measure performance of the ball. We also take balls into the field to a bowling center and find out what bowlers are seeing when they're throwing the ball down the lane."

Hickland estimates that he designs about 40 balls a year, for both the casual bowler who's more into aesthetics, to the pro who notices the most minute details.

Of course, there are many factors that go into a ball's performance based on the present game. For one, bowling alleys put lubricant on the lane to protect it but it diminishes the friction so a hook—a key to success in a throw—is diminished. "We want more entry angle for the throw because it correlates to more strikes," Hickland says. "Fifteen years ago we had a performance breakthrough with a shell cover stock which absorbed oil off the lane so you could create more friction and create more hook. It's called reactive technology. The problem is that the ball will fill up with oil over time, which hurts what it can do. I actually have a patent on a product that reduces oil from the ball."

Performance can even come down to the holes. "The location is determined by the bowler's axis of location and it's different for each bowler," he says. Though pro shops actually drill the holes, companies such as his give drilling instructions for greater success.

And Hickland is turning his attention to pins as well, an aspect of the game which hasn't changed much. "The pin itself has strict dimensions but we are the sole distributor of a synthetic pin on the market which has longer durability," he says. "The normal pin is a wood core and typically only lasts one to two years. It can take a long time to get a new pin approved, at least a year."

Hickland looks back at how early he got involved in bowling and realizes how blessed he was to know what he wanted to do. "There just wasn't any doubt in my mind," he recalls. "Not many people can really say that."

I realized it was the inner workings of the ball that I wanted to work on, so mechanical [engineering] won.Ronald Hickland Jr., director of product design, Ebonite International