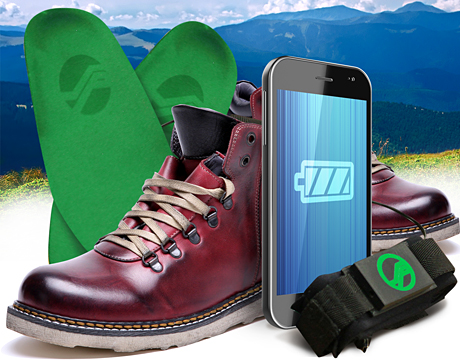 When was the last time you were scrambling to find a power switch because your smartphone, iPod, or tablet ran out of charge while hiking, camping, or at a tradeshow? Perhaps, just last summer? Now imagine a removable shoe insole that harnesses the kinetic energy of everyday walking to charge your devices whether you are out in the wilderness or on the show floor. That insole has been developed by two young Carnegie Mellon mechanical engineering graduates.

What started off as a capstone mechanical engineering design project at Carnegie Mellon University, and then became a Kickstarter project, is now a Pittsburgh-based startup called SolePower (part of the incubator AlphaLab). Founded by Matthew Stanton and Hahna Alexander in September 2012, Sole Power is now refining its energy-harvesting technology and aims to get to market by the end of 2014.

According to the founders, SolePower’s initial target market will be hikers, backpackers, and other outdoor enthusiasts who don’t have any other option but solar power to charge their mobile electronics. SolePower, however, is also looking to partner with NGOs and mobile companies for case studies in developing regions, where portable electronics like cell phones act as lifelines.

One Step at a Time

“Originally it was just a light up shoe so that students could be seen walking to and from campus at night and cars could easily see the students. It wasn’t until we showed it off at Carnegie Melon alumni event in DC that we really saw a market for it – defense industry, humanitarian organizations who could use it overseas, and outdoor enthusiasts who go hiking all the time,” says co-founder and CEO Stanton.

SolePower’s mechanism and design is simple. “It takes the linear movement of the step (the impression that occurs when the foot impacts the ground), converts it into a rotational energy, which then spins a generator,” explains Stanton. The insole captures this energy and stores it in an external battery that can be accessed via micro or mini USB ports. “What’s unique about our technology is that we have created a system that allows the generator to only spin it one direction to make it a more efficient and robust,” he adds.

According to co-founder and CTO Alexander, SolePower’s competitive advantage over similar devices that are trying to harness the power of walking is that instead of being embedded into a shoe, it’s a removable shoe insole. “Being an insole and not a shoe it gives us much more versatility in the sense that we can put it in a sandal for use in developing nations or sell it to the boot company and put in boots for soldiers,” she says.

SolePower is waterproof and weather-resistant and its current simulations and calculations indicate one insole will last three years of walking, which means an average daily person walking 2.5-5 miles a day. The company is working toward a product that will charge an iPhone or a similar smartphone in 2.5 miles. “We are pricing it around the same as other solar tech products - around $130 per device - then we will go to outdoor retailers to start selling to consumers,” says Stanton.

Shrinking things down to a size that would make it usable was the biggest technical challenge while designing the insole, according to Stanton. “We are pretty much past that one. Now getting it to market and making it mass manufacturable are the two big hurdles on the horizon,” he says.

Finding a good mentor is essential for any engineer considering being an entrepreneur. Both Stanton and Alexander acknowledge the guidance they received from their mentors at the startup incubator AlphaLab. “We are both engineers so we didn’t know how to run the financials or put a business plan together. The mentors opened our eyes to what was coming our way,” says Stanton.

“Especially when you are hitting your head against the wall going the wrong route, you need a mentor to steer in the correct path,” Alexander reiterates. Another lesson that she learned along the startup road is talking to customers early on in development than later. “They told us we should make it [the insole] more aesthetically pleasing and that helped as until then we weren’t thinking in that direction.”

Currently working out of TechShop in Pittsburgh, PA, the SolePower team is plugging away to improve the design of the insole. “We design, produce, and manufacture ourselves. That allows us to rapidly iterate and do it very cheaply. It also makes us understand the manufacturing aspect of it,” says Alexander, adding that “the product has to be comfortable so we are solving every technical challenge. We've talked with local podiatrists to make sure SolePower doesn't affect the way people walk.”

As the SolePower team continues to evaluate and refine their product, next time your cell phone runs out of battery, consider taking a power walk.

Being an insole and not a shoe it gives us much more versatility in the sense that we can put it in a sandal for use in developing nations or sell it to the boot company and put in boots for soldiers.Hahna Alexander, CTO, SolePower