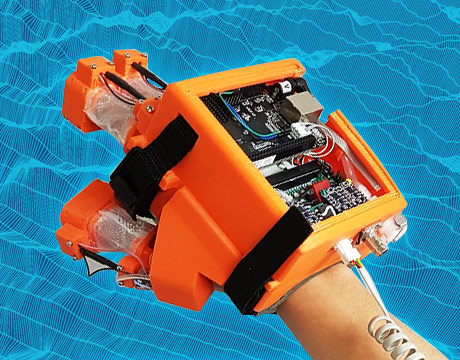 “Soft” robotics are human-friendly, low-cost, and lightweight robotic systems that are often worn by the user. Examples include controllers, gloves, and highly functional and integrated vests or exoskeletons for immersive virtual reality applications.

A leader in haptic technology is Cagdas Onal, an assistant professor of mechanical engineering at Worcester Polytechnic Institute in Massachusetts. His research at the Soft Robotics Lab focuses on unconventional robotic systems, especially soft robots, with the long-term goal of integrating these robots into our daily lives, with a transformational impact similar to that of the internet and mobile revolutions.

“Many potential applications exist, including prosthetic/orthotic devices, wearable technologies, robotic collaborators/assistants, elder care, and systems that augment human performance,” says Onal. “Or viewers can be brought into a first-person movie or video game character and feel the various grasp and contact forces in their hands. Similarly, a telepresence robot with a human-like arm may be remote-controlled to unload the dishwasher at home from work.”

Onal is especially interested in how haptic technology can advance robotics, especially in the sub-fields of mobility, manipulation, prosthetic devices, and human augmentation, including haptic gloves.

Haptictechnologies recreate the sensation of touch by applyingvibrations, motions, or other forces to the device being held or worn by the user, such as computer controllers or gloves. The greater the precision of what is being measured (force, for example), the more realistic the response will be for the end user.

Force feedback is currently delivered using stationary haptic devices, vibration motors, and other mechanisms that move the human finger. Intent on making this a more realistic experience, Onal developed an advanced haptic glove that is worn by the user and senses the hand of a remote robot. When the robot touches an object, the glove receives tactile feedback, allowing more precise control of pressure of the robotic arm.

“My goal is to make soft, wearable haptic gloves that transmit forces and physical contact over long distances, as easily and safely as audio and video,” says Onal. “This way users can reach out and touch remote environments, objects, and other users with their own hands.”

The soft actuators were inspired by astronaut gloves that are pressurized and therefore resist finger flexion, making it difficult for astronauts to carry out dexterous tasks. “We used that property to our advantage to create a wearable actuator that resists motion by creating desired forces/moments on the finger joint, corresponding to measured or simulated grasp forces at an end-effector of a remote robotic hand,” says Onal. “The system creates little resistance to the motion and force range of the user when pressure is released.”

Onal’s haptic muscles are a first in the field, with a unique toroidal shape. They are inherently soft and conformal, which reduces the potential for undesired large forces on the hands. “The actuators don’t actually move the fingers directly, they just resist motion by an adjustable amount, which eliminates the possibility of overextension,” Onal adds.

The force sensation of the glove is surprisingly realistic because it does not rely upon sensory substitution (for example, vibration motors) to communicate direct force feedback to the user.

“Before I wore the glove for the first time, I had my doubts about the realism we could capture with the system,” admits Onal. “However, with no training, I was able to move a virtual arm toward a target object and grasp it within 10 minutes.”

Initial results show the feasibility of wearable haptics based on soft robotic principles. “In short,” says Onal, “we have shown that we can track the motion of the human arm using on-board sensing, replicate those motions remotely with a robot arm, and provide forces encountered by the robot arm back to the user as force feedback.”

Onal is currently integrating the sensing, actuation, and control elements in the glove to make it lighter and more comfortable to wear over long periods.

“We plan to test multiple feedback modalities in addition to the haptic muscles to add tactile sensation of different textures, using a proprietary electrotactile transducer our team has developed,” Onal says. “We also would like to implement a complete bilateral teleoperation system to experimentally control a robotic arm in real-world scenarios.”

Ultimately, the goal is to achieve meaningful intuitive telepresence, immersion, and physical collaboration in virtual and augmented reality environments through realistic force feedback. Examples include using the system to remote control, program, and supervise robots in manufacturing or emergency response. The gloves can also be combined with virtual reality headsets to achieve an enhanced immersive experience in gaming or other virtual/augmented reality applications. In fact, the glove has already been licensed to PowerHive, a consumer technology company in Massachusetts, which plans to use the technology in virtual reality games.

My goal is to make soft, wearable haptic gloves that transmit forces and physical contact over long distances, as easily and safely as audio and video.Prof. Cagdas Onal, Worcester Polytechnic Institute