Guarding the Gate Without Risking Infection

The coronavirus is most easily spread in enclosed spaces, such as vehicles and buildings. After shutting down for part of the year and relying on remote work, many businesses are—tentatively—opening their offices to employees.

To keep symptomatic workers from infecting entire businesses, employers are resorting to temperature screenings in the front lobby. Those screenings are often time-consuming, creating lines to enter the building that could, in some cases, produce conditions for transmitting the viruses.

Mechanical engineer Howard Horn realized this spring that rather than using security staff to operate the checkpoint, it would be faster and safer for building owners to automate the process.

Horn is founder and CEO of Advanced Kiosks in Concord, N.H. His company—which he can rightfully say was founded in his garage 20 years ago—makes and distributes interactive kiosks used in hotels, hospitals, and other places where individuals need to receive or present personalized information. 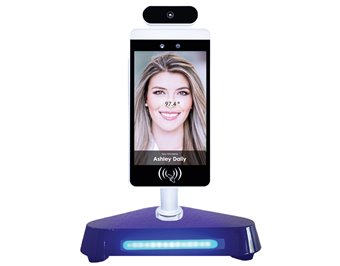 The Guardian kiosk uses an infrared scanner to check temperature and a facial recognition system to ensure mask-wearing.
As kiosks have become a means of accessing office directories or obtaining airline boarding passes, it has become normal for people to interact near entry points before going deeper into buildings. It would make sense to incorporate simple medical screening devices into entry point kiosks.

“The very simple interface tells you to just stand in front of it,” said Jeff LeBlanc, director of user experience at Advanced Kiosks. “It will take your skin surface temperature off the forehead and, optionally, do some limited facial recognition and detection to see if you're wearing a mask. The idea is to help businesses and organizations just implement whatever policy that they may have for letting people into the building.”

Horn and LeBlanc are the first to point out that the company did not innovate the temperature sensor technology the Guardian Kiosk utilizes; the sensors were imported from Asia. And the facial-recognition algorithm used by the system to check for compliance with mask-wearing was developed elsewhere. The company’s innovation came from repackaging the concept for a North American market that was not especially comfortable with biometric screening and in working with a software vendor to completely rewrite the operating system to meet American standards for data security.

“The software that we put on this hardware now is 100 percent made in the United States and the data is not going anywhere,” LeBlanc said. “In this day and age, everybody's going to be concerned about that.”

Given the fluid nature of the pandemic, the team worked fast. From the initial investigation to delivery of the first product took less than two months.

The Guardian Kiosk is far from fool-proof—some people with COVID-19 are asymptomatic and obviously employees who wear a mask in the lobby are capable of taking them off in the office. But the technology points to the kind of automated, frictionless monitoring that we may see more of in the future.

“Having a worker take temperatures might take less than 30 seconds, but imagine 200 people in line for a movie,” LeBlanc said. “By the time you check everyone in that line, the movie is half over.”

See who the other winners are in Video: 2020 Emerging Technology Awards