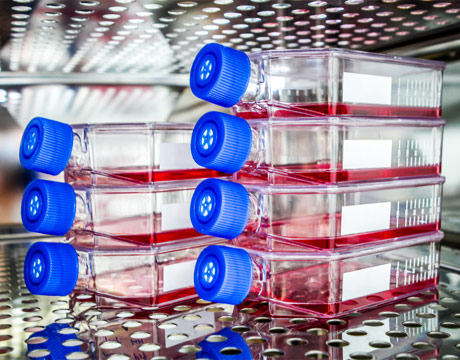 As part of its Centennial Challenges program, the National Aeronautics and Space Administration (NASA), partnering with the nonprofit Methuselah Foundation, is encouraging advancements in bioengineering, specifically in organ and tissue preservation, both to benefit human disease research and NASA’s journey to Mars.

The Vascular Tissue Challenge, announced in June, includes a $500,000 prize to be divided among the first three teams to create vascularized tissue that is more than .39 inches (1 centimeter) in thickness and maintains more than 85 percent survival of required cells throughout 30-day trial periods. Teams are also required to prepare a proposal about how they could advance their work through a microgravity experiment. The competition is being administered by Methuselah’s New Organ Alliance (NOA), a nonprofit focused on regenerative medicine research and development.

The hope is that vascularized tissue created can be used to study deep space environmental effects, such as radiation, and to lead to solutions to minimize damage to healthy cells without exposing humans. That’s in addition to having tissue to help develop organ models for research and other therapeutic applications on Earth.

Part of the challenge is based on the hypothesis that growing tissue of major organs will be easier in microgravity in deep space because on Earth, gravity compresses the tissue and vessels, explains Monsi C. Roman, Challenge program manager. If true, “This is the dreaming stage about the future,” she adds. The idea is that growing and testing engineered tissue could become big business conducted in deep space for private industry.

One team, which has submitted an “intent to compete” form is from Rice University, where Jordan Miller, assistant professor of bioengineering, will lead the team. He has been working on lung tissue engineering for a couple of years.

“One reason we are excited about the challenge is because we share a lot of the vision that the challenge has elaborated,” Miller says. “Just the fact that more people will be working in this area...is going to lead to some major advances.”

He notes that compared to work with tissue that doesn’t havevasculature, such as cartilage and the cornea, the complicated architectures of vascular networks of the lungs, liver, and kidneys are very hard to make. Although all kinds of branched networks are common in nature, scientists and the engineering community lack the tools to efficiently engineer highly branched, complex networks, he says.

His team thus far has been focusing on the topology of the lung that can be described as two complex independent branched networks of airways and blood vessels next to each other. They are never connected directly in order to prevent blood from entering the airways and, likewise, air into the bloodstream. “You just need to get oxygen across the gap between them,” says Miller. “Our central goal is to engineer multiple vessel networks, one for air and one for blood, in a fixed volume and try to get the distance between them small enough that we can get oxygenation of the blood by air in the other network.”

The plan is to make engineered tissues in the lab out of huge numbers of cells, potentially in the billions of cells per tissue, way beyond the scale of human organs. “From an engineering perspective, we can expect this will increase the complexity of the vasculature and improve the performance of the tissue, but that remains to be tested,” he says.

While the team is looking at 3D stereolithography to fabricate the tissue and is building its own printers, Miller noted that the scaffolding fabricated would also need to incorporate functioning organ cells because “We don’t know how to make a plastic or metal that can [for the liver, for example] metabolize nutrients and toxins like the liver can.”

While the challenges may seem daunting, he expects some of the biggest are not even known yet. “We are definitely dealing with unknown unknowns in regenerative medicine for some of these very complicated organs,” Miller says.

Some of the issues already realized include how much of the structure can be packed into as small a volume as possible. “The surface area of the airway is extremely large. We estimate it as big as a football field in your chest,” says Miller. Another is that processes and tools need to be re-developed to get accurate readouts of engineered tissue, and then there’s the issue of compatibility of blood with various chemicals and materials so that the blood doesn’t clot.

NASA’s challenge is part of a much broader initiative aimed at improving outcomes for individuals waiting for organ transplants. At a White House Organ Summit earlier this year, it was announced that almost $200 million was being invested by government, private industry and non-profits to facilitate breakthrough research and development. Among others announced was a related prize by the government-funded Center for the Advancement of Science in Space, which manages the International Space Station U.S. National Laboratory. This competition offers one challenge entrant the opportunity to conduct research in microgravity conditions. The prize is up to $200,000 in flight integration support costs, along with transportation to the Space Station Lab, support on the station and return of experimental samples to Earth.

The challenge program, started in 2005, involves project-specific competitions for monetary prizes to induce non-government funded advancements in technology development. “Our charge is to help contribute to our journey to Mars. It’s about inviting everybody who has something to contribute,” says Roman.

We are definitely dealing with unknown unknowns in regenerative medicine for some of these very complicated organs.Prof. Jordan Miller, Rice University