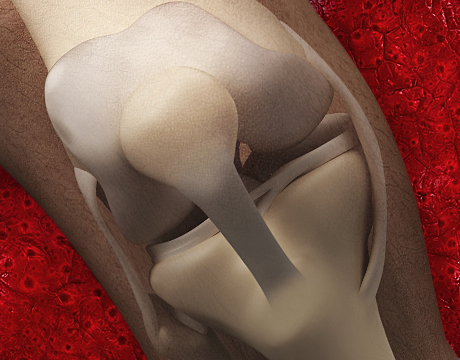 After decades of trying, researchers at Columbia University have discovered how to grow fully functional human cartilage in vitro from human stem cells that come from fat tissue or bone marrow.

People always assumed that cartilage would be an easy tissue to grow because it is very simple, consisting of only one type of cell, no blood vessels and no nerves, says Dr. Gordana Vunjak-Novakovic, the Mikati Foundation Professor of Biomedical Engineering at Columbia Engineering who led the study.

Until now, researchers have had success in engineering pieces of cartilage using young animal cells and also in creating synthetic replacement cartilage in the lab. But this breakthrough means one’s own fat tissue or bone marrow can be used to grow cartilage to repair a person’s own cartilage defect.

Cartilage is the thin layer on the surfaces of joints and in the nose and ears. This breakthrough could help millions of people who suffer pain or lack of mobility as cartilage cushioning joints erodes over time or is damaged by injury.

Vunjak-Novakovic says both her team’s approach and the synthetic approach developed by researchers at Duke University have good potential for clinical application. “Certainly, we do not have a definitive solution, and there may not be a single solution for all patients and clinical situations,” she adds.

About a year ago, stumped after years of work, members of Vunjak-Novakovic’s team decided to “forget everything we had tried,” look back at biology books, and see how the body makes cartilage, she says. “Our overall approach in the lab is to design our tissues based on biological principles. Everyone was always starting from the step when cartilage has been made in the body so we decided maybe there is something in the previous step that is priming the cells to do their job differently.”

In the body, the cells that form the cartilage first form little cell bodies in which cells are tightly packed. This triggers some of the biological processes that give rise to cartilage. “This was never introduced in vitro before,”says Vunjak-Novakovic. “We did that and continued to culture the forming tissue for several weeks. At the end of the process we had this very beautiful stratified structure. We achieved for the first time complete stiffness and tribology of cartilage.”

It is especially rewarding, she says, because this method is extremely simple and something everyone can do.

Asked why it took so long to achieve, Vunjak-Novakovic says, “It’s interesting how in life you often say: ‘Why didn’t I think about this earlier?’ It’s exactly this.”

According to her, one of the next steps is using the model in a lab to further some of the developmental processes and study them in the context of disease, for example, modeling osteoarthritis in order to understand the progression of the disease and to look for drugs or measures that would be helpful. Another is to conduct animal studies to determine the durability of the cartilage and whether it develops further in the body to be able to predict how it would work in human patients.

As the project moves forward, 3D printing may play an important role in multiplying the mesenchymal cells isolated from bone marrow or fat to produce the very small, uniformly sized “cell bodies” that generate the functional human cartilage tissue. “We used a very simple method for making the cell bodies, but one can envision that clinical reconstruction of large surfaces of cartilage lost to injury or disease would require fast 3D printing of large numbers of cell bodies directly onto anatomically shaped pieces of engineered bone to grow a graft for implantation,” says Vunjak-Novakovic.

“This is teamwork,” she points out. “All of these problems are too big for one person and often too big for one lab. Columbia is a phenomenal place to be if you are doing something interdisciplinary. Everyone is used to working with others and to stepping out of their zone of comfort.”

For Further Discussion
At the end of the process we had this very beautiful stratified structure. We achieved for the first time complete stiffness and tribology of cartilage.Dr. Gordana Vunjak-Novakovic, Columbia University