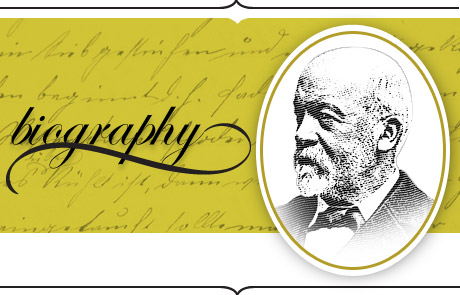 It's probably safe to say that we were going to get our modern automobile one way or another. Those that had a hand in the invention of the car were legion. But if these engineers are to be whittled down to an important few, Gottelib Daimler stands as a giant among them.

The Shorndorf, Germany born Daimler was famously a workaholic and a tough cookie. At the age of ten he was apprenticed to a gunsmith, where he produced his own double-barreled pistol. Subsequently he shot off to study mechanical engineering. In 1865, he met Wilhelm Maybach in Stuttgart. The pair formed a life-long partnership with the simple goal of making engines to move vehicles. The pair wound up working with Nikolaus August Otto and his partner Eugen Langen to produce the four-stroke internal combustion engine.

Daimler spent ten years at the Gasmotorenfabrik Deutz, as the shop was called, before he left over a disagreement.

He was determined to improve on Otto's engine and put it on wheels. Using the funds from his settlement with Otto, he bought a villa in Cannstatt. He built an extension to the greenhouse there, which became his and Maybach's lab in 1882. Soon they had their first patent. Based on the Otto four-stroke, it had "hot-tube" ignition. But its similarity to the Otto engine started a patent war with his previous employer. The courts, though, would eventually favor Daimler.

The next greenhouse emission the duo produced was the "grandfather clock" of 1884. It had a surface carburetor to mix gasoline with air before combustion. This engine earned its name from its shape. It also earned its inventor's bragging rights for making the first motorcycle when the pair put a single-cylinder version on a wooden frame. Daimler's son Paul rode this first bone-crusher for six miles, at a startling clip of 7 mph.

Two years later, when Daimler placed another grandfather clock under an American-made carriage he secured his place in automotive history as the inventor of the four-wheeled, four-stroke, gas-powered car.

With two vehicles down, Daimler turned his attention to putting his engine on ships. He moved to a bigger and better lab and made the mistake of hiring 23 employees. Sales of boat engines did not outweigh the wages he had to dole out, and Daimler was forced to find investors. With outside funds, the lab became the Daimler-Motoren-Gesellschaft, or "Daimler Motor Corporation."

Finding backers came at a price, though. Maybach backed out in a huff as the contract reduced his role. Daimler and his new managing director, Max Duttenhofer, were soon butting heads. Duttenhofer wanted to produce commercial, stationary engines, while Daimler wanted to continue to find ways to make things move. The result was that Daimler began to secretly siphon funds away from the company so that Maybach could continue design work. The resultant patents were surreptitiously registered in Maybach's name alone.

When Daimler-Motoren-Gesellschaft continued to flounder, in 1893, Duttenhofer forced Daimler out of his own company (insisting he sell sale his shares in the company or pay its debts). This did little to put the company in the black and it would certainly have dissolved before too long if it weren't for the British inventor Frederick Richard Simms. Simms wanted to license Maybach's Phoenix engine and he offered the company 300,000 marks to do so, on condition that Maybach and Daimler rejoin first. Duttenhofer agreed, and the company immediately turned around (and Simms soon had built the world's first armored car with a Maybach Daimler engine). In history's first automobile race, only 15 of 100-odd cars made it to the finish—all of them with Daimler engines. In the ensuing years, Daimler and company produced a "vee twin" engine, a four-cylinder engine, a four-speed gearbox, a new carburetor not unlike those of today, and an automobile with a front-mounted engine.

But Daimler had been having heart trouble since the year Daimler-Motoren-Gesellschaft sold its first car, in 1892. He died in March 1900, just as the century turned, and just before his company turned out its first Mercedes.

Daimler and company produced a "vee twin" engine, a four-cylinder engine, a four-speed gearbox, a new carburetor not unlike those of today, and an automobile with a front-mounted engine.