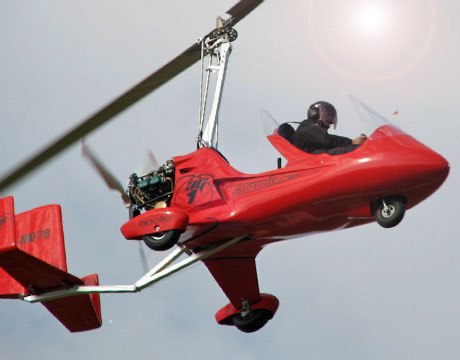 A propeller whips at the back of a weight shift vehicle. You take off and it could seem you’re almost on a hang glider, the pilot holding onto a bar, which he’s been pushing to control the wings. You look around through what is usually an open cockpit, however, and there are no windows keeping you from nature, from feeling like a bird.

Some call them “ultralights,” others “trikes,” depending on weight and passengers. But most who watched Fly Away Home with Jeff Daniels and Anna Paquin just saw how exciting this type of flying can be. Abid Farooqui, who had been co-owner of Evolution Trikes for years and has since started SilverLight Aviation, says his full-time crew, which includes two mechanical engineers, believes the challenges to designing are still there.

According to www.sportaviationcenter.com, trikes have an advantage over airplanes because they lack a tail. “They are not burdened by the weight, drag, and down-force associated with the tail structure,” the site says. “This gives trikes better climb rates and the ability to carry greater loads.

“The wing is a semi-flex wing and has no control surfaces,” Farooqui says. “It’s all happening by shifting weight or by running motion of the whole surface of wing. Then there’s the carriage—that’s what the wing is attached to. The whole carriage assembly has a vertical tube going from bottom to top, usually behind the cockpit, and meets up with the wing. You also have the mats and the trikes are triangulated.” The cockpit is located near the mast.

Trikes also allow for a lot of potential innovation, with wings commonly customized. “I remember choosing to go with an Italian wing, then tweaking it,” he says. “We had no idea of the result but that’s part of the fun. I found that change took us up to 80-85 mph cruising and went cross country from Florida to Oshkosh and back. That was 25 mph better than anything we created before. Going over mountains, I had never seen anything like that in an open aircraft.”

He ended up working on ones that were even faster. Evolution’s Revo has 80 hp, a gross weight of 1,040 pounds, and a maximum straight and level speed for the competition wing of 110 mph.

Because there are fewer requirements than some aircraft, he finds it a dream come true to design with his crew. “When I was a kid growing up in Pakistan, I never imagined that I’d be flying everywhere in any vehicles like this, “says Farooqui, who has a degree in microelectronics from the Rochester School of Technology and in computer engineering from the University of South Florida. “Then I saw a book with pictures of airplanes and knew it’s what I wanted to do. The trike came out of that. It’s a whole different kind of view. And it’s still exciting.”

For Further Discussion
When I was a kid growing up in Pakistan, I never imagined that I’d be flying everywhere in any vehicles like this.Abid Farooqui, SilverLight Aviation