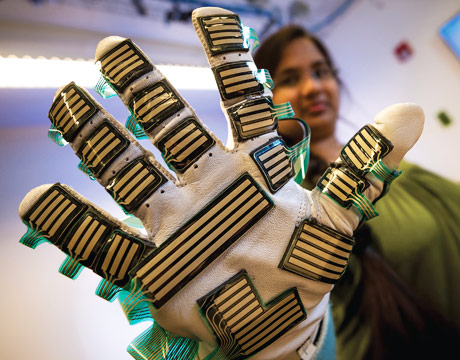 A Glove With an Objective Touch

Like beauty, muscle stiffness is in the eye of the beholder. That revelation drove researchers at the University of California, San Diego, and Rady Children’s Hospital to develop a sensor-filled glove that enables them to better evaluate and treat patients stymied by brain injury, stroke, and such debilitating muscle-control conditions as multiple sclerosis and cerebral palsy.

Doctors traditionally use touch and feel to assess the force and speed at which they can move a stiff muscle. The technique is highly subjective, and two doctors evaluating the same patient often reach very different conclusions.

The glove literally puts a sophisticated measurement instrument into the physician’s hand. It uses hundreds of sensors to provide objective feedback about the force a doctor applies to an arm or leg, the speed at which the limb moves, and the threshold at which patients begin to feel discomfort. This information would help physicians prescribe medications more precisely and safely.

The prototype consists of more than 300 pressure sensors attached to the palm of a sports glove with an accelerometer on the back. Advanced signal-processing algorithms analyze and map the data these sensors send back in real time. The result is a numerical reading that more precisely assesses a patient’s muscle stiffness.

It may sound simple, but it was anything but. “We thought we’d just put the glove on the doctor’s hand and measure how much resistance they were feeling,” said research scientist Harinath Garudadri, an associate researcher at UCSD’s Qualcomm Institute who leads the project.

Garudadri’s original plan was to calibrate the glove to a standard evaluation method known as the Modified Ashworth Scale, a six-point measuring system that doctors score as they move a patient’s limbs with their bare hands. When Garudadri asked two specialists to assess the muscle tightness, or spasticity, of five cerebral palsy patients, their assessments agreed a mere 27 percent of the time.

“We didn’t expect that,” Garudadri said. “This scale was a lot more subjective than we had realized.”

The researchers looked for a better way to calibrate the glove. They ended up with an artificial arm that simulates how humans flex their muscles. Operators manually set the arm’s resistance (using a mechanism that works like a bicycle’s brakes) between 5 and 20 pounds. When the physician moves the arm, onboard sensors compute its resistance, arm speed, and the amount of work the doctor performs.

Then Garudadri and his team played doctor. After setting the arm’s resistance, they checked how well the glove measured the power needed to move the arm. The glove got it right 64 percent of the time.

A multidisciplinary team of scientists, students, technicians, and computer programmers has worked to boost the system’s reliability by improving the glove’s sensors, making them robust, and experimenting with 3D printing them onto the glove.

Although nothing in medicine is foolproof, Garudadri believes that if the team can increase agreement to 90 percent, the glove would be reliable enough to provide doctors with additional information to supplement the Modified Ashworth Scale. That would be a giant step forward in assessing spasticity, and enable doctors to use the glove to guide treatment options and improve patient care, he said.

Garudadri plans further tests to make sure the doctors are comfortable with the glove’s design and the information it provides. After all, he said, “they are the health care experts who make clinical decisions.”

Going forward, Garudadri hopes to develop similar gloves for other procedures where doctors now rely on touch and feel to evaluate a patient’s condition. These include monitoring spine health, assessing the severity of hip dislocations in infants, rehabilitation therapy, and physical therapy.

View current and past issues of Mechanical Engineering.

For Further Discussion
We thought we’d just put the glove on the doctor’s hand and measure how much resistance they were feeling...This scale was a lot more subjective than we had realized. Prof. Harinath Garudadri, University of California, San Diego