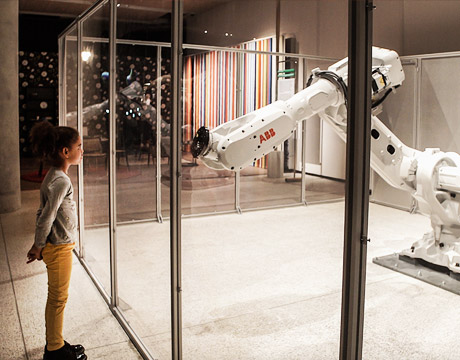 Mimus is an industrial robot that interacts with people by responding to their movements. Image: Atonaton

While her robot, Mimus, isn’t a pet, Madeline Gannon programmed the industrial robot to behave like a docile creature. It’s all in the name of sparking a conversation about the way robots and humans interact.

For a recent art installation, Gannon trained a common industrial robot, which she named Mimus, to move spontaneously while roaming around its enclosure. Mimus appeared at the Design Museum in London through April as part of the exhibit “Fear and Love: Reactions to a Complex World.”

Gannon is principal researcher at the Carnegie Mellon Atonaton Studio, which develops ways for humans to better communicate with machines.

Mimus is the name of the bird genus that contains mockingbirds.

Mimus the robot is an ABB IRB 6700 industrial species of the type usually used on automotive assembly lines to perform tasks like spot welding and material handling. The robot can hold up to 441 pounds, has a reach radius of 8.5 feet, and moves at a top speed of about 15 miles per hour. In other words she (as Gannon calls the robot) is not a machine to be trifled with.

Which is exactly the point, Gannon says.

“As intelligent, autonomous robots become a more ubiquitous part of the built environment, it’s critical we design more effective ways of interacting and communicating with them,” she says.

The newer, smarter, autonomous robots — like drones, trucks, or cars — share many attributes with industrial robots: they’re large, fast, and potentially dangerous, and they don’t communicate well with their human counterparts, Gannon adds.

“But deciding how these robots mediate our lives should not be the sole discretion of tech companies or cloistered robotics labs,” she says. She programmed Mimus with a simple, agent-based behavior that generates her movement and trajectory.

“As the programmer, I set up the boundaries of where she can and cannot go. So, for example, she can't run onto the floor or leave her enclosure, but she decides how to move to go visit a person,” Gannon says.

Mimus did act toward her admirers like a relatively tame animal kept at bay by a gate at the zoo. Mimus depicts one way people could empathize with a machine and, in that way, better live harmoniously and safely with autonomous robots: via body language, Gannon says.

“In developing Mimus, we found a way to use the robot’s body language as a way to cultivate empathy between museum-goers and a piece of industrial machinery,” she says. “Body language is a primitive yet fluid means of communication that can broadcast an innate understanding of the behaviors, kinematics, and limitations of an unfamiliar machine.”

Mimus also shows the untapped potential industrial robots have for working with humans. After all, Ganon adds, industrial robots aren’t going anywhere. They’ve remained relatively unchanged for the past 50 years.

“When something responds to us with lifelike movements–, even when it is clearly an inanimate object, we, as humans, cannot help but project our emotions onto it,” Gannon says. But body language isn’t the sole way to bridge the human-robot divide, she adds.

“We need many more diverse and imaginative solutions for the various ways these intelligent machines will immerse themselves in our homes, offices, and cities,” Gannon says.

In response to one commonly cited social fear: robots taking work from humans, Gannon says she believes in a more optimistic future, where robots expand humanity instead of replacing it.

“With Mimus, rather than view robots as a human adversary, we demonstrate a future where autonomous machines, like Mimus, might be companions who co-exist with us on this planet,” she adds.

For Further Discussion
When something responds to us with lifelike movements, even when it is clearly an inanimate object, we, as humans, cannot help but project our emotions onto it. Madeline Gannon, Carnegie Mellon Atonaton Studio