Giving a Robot a Hand

Giving a Robot a Hand 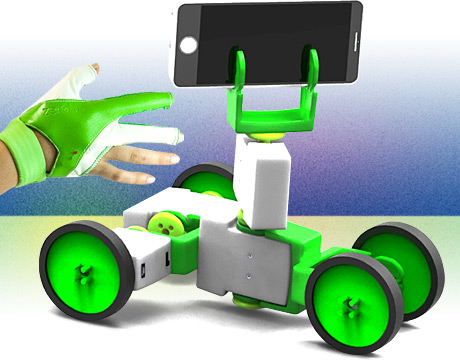 A toy-building kit that allows children to create robots and control them remotely. Image: ZeroUI

Decades ago, kids were thrilled to get a robot of any kind. Watching it move and maybe talk made it feel like a new friend. Now, a new robot promises to let the user have more input into design and even choose its parts; parts that don’t necessarily come from the kit. A child is empowered to take ownership of their toy in more ways than one.

“One of the things that can be great about a toy is when it lets children have greater control in what it will be,” says Karthik Ramani, a professor of mechanical engineering at Purdue University. That was part of what was behind the Ziro kit, which, in addition to allowing users to choose parts, also allows a person’s hand movements to decide the movement of the robot.

“Around 1995 I was starting to teach a toy design class,” says Ramani. “My research hit areas like manufacturing, fabrication, then design, and then I even worked on human computer interaction. Here, when it came to research with the students, there was the thought of developing a new kind of toy platform that can be good for STEM learning. We were testing with children and they were enjoying robots. Some just had such a need to make that toy work in a way that mixed with their creativity.”

Ramani’s team saw this kit as a strong opportunity partly because it’s free form. Kids can even repurpose material from their homes for the robot. “We just give them the muscles and the brains,” he adds. “They bring so much of themselves to it.”

Using sensors, a person using the kit can actually, with a wave of their hand, move the robot as they would like. “Phones have brought the hand and fingers into play so much,” he says. “We’re using natural user interface here, where it’s very intuitive. We do it for the kit with wearables: a gesture-controlled platform that uses a glove. On the glove there are chips and we have sensors on the fingers. The glove is the brain of the robot. It understands what the hand is doing as it’s doing it and then sends messages to modules, which have microcontrollers and wireless communications, and it coordinates the modules based on what you’re choosing to do with your hands.”

There are multiple materials that can be used to connect objects to the robots, including velcro. And what Ramani has enjoyed is how some of the youth involved in testing stuck to their tasks with such focus. “I remember one who wanted to make his like a drummer,” he says. “He was adding some materials for hitting and he just wasn’t going to stop until he got closer to his vision. You love to see that passion. They [the testers] wouldn’t quit.”

A Robot Grows Up

The idea is also that the robot they have can grow with the child. They don’t have to buy a new robot for every new task or theme, but it can start as, for instance, a robot with wheels when they’re young and then get more sophisticated as they choose different parts to add over time, such as in the drumming example, he says.

“This works well somewhat because you don’t have to look at your hand as it’s moving. Your mind knows,” Ramani offers. “You don’t need to learn sophisticated mapping. When you’re talking about building with mechatronics, it can take so long to program the electronics and build the robot. It’s better when they can build parts but not necessarily need that knowledge. It’s important to have fun and grow.”

For Further Discussion
The glove is the brain of the robot. It understands what the hand is doing as it’s doing it and then sends messages to modules.Prof. Karthik Ramani, Purdue University