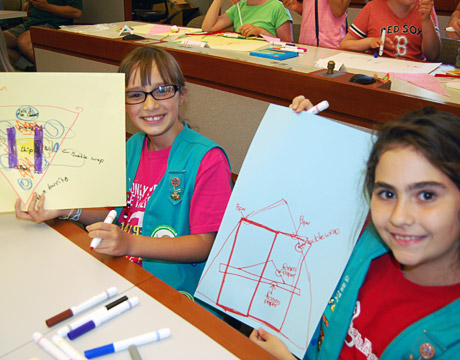 ASME members and the Girl Scouts held a unique event at MIT on Saturday August 1 for twenty five Girl Scouts, aged 9-11. Dressed in their green uniforms with sashes full of badges, the girls became engineers for an afternoon and faced a challenge: package a potato chip for shipping so it doesn’t break.

The girls were given a potato chip which was painted with food coloring to look like a butterfly. Next, forming teams of two, they began experimenting with bubble wrap, sticks, straws, paper clips, masking tape, scissors, sketching paper, and a ruler to engineer the best package for their butterfly potato chip. The STEM workshop, Dream, Design, Create: Explore the World of Mechanical Engineering, also involved several ASME members and a dozen parents and scout leaders.

The competition began. There was a lot of talking between the girls about how to solve the problem. Marcelle said, “I want to learn about things that I never did before. I like to do chemistry, mixing stuff. Building a contraption not to break the potato chip is going to be hard.” And her partner Jahnia added, “I wanted to test out some new things I haven’t done before. I want to be an engineer to make my own things, build something with my hands.”

Using the materials, the girls began tackling the challenge. Some sketched out their designs; others tried building their prototype one straw, stick and piece of bubble wrap at a time. As the clock ticked down, the girls designs emerged - all looking very different with pieces of bubble wrap going in every direction to protect the precious potato chip.

Then came the real test- could all their hard work and ingenuity help the chip survive when a book was dropped on it? One by one, each team eagerly brought their uniquely wrapped chip to the table and the anticipation built. As the scout leader held the heavy book above the prototype, everyone held their breath. Down came the book crashing on the package! Each team then rushed to unwrap theirs, but each time, the chip had been shattered.

Charlotte de Vries, ASME member and assistant professor at Penn State University Erie, encouraged the girls not to be discouraged. “We learned a lot today. We learned maybe we need more tape or bubble wrap and maybe we need more time to build our package. Sometimes it doesn’t work and you have to do it again, again and again- that’s part of being an engineer.”

The team of Kaleigh and Tanya didn’t lose their enthusiasm. “I already went to something like this before and it was really cool. I might want to be an engineer when I grow up because I like creating things. Working with more than one person is easiest because it helps you figure out which design is better,” said Kaleigh. Tanya added, “It’s almost impossible not to break a chip in this project. I like things like 3D printing and egg drops and I think it’s a lot of fun. My dad is engineer at GE.”

The next experiment was the “Let’s get energized” project. Again, acting like engineers, they had to determine which kind of insulation would conserve the most energy and keep their house warmest in the winter. The materials this time were pieces of polyester, aluminum foil, a cotton t-shirt, newspaper, bubble wrap and a wool sock. The girls used all of these materials to wrap up their plastic cup in a way that would provide the best insulation.

The ASME members then poured hot boiling water into each of the scouts’ insulated cups and inserted a thermometer. The girls were instructed to come up with a hypothesis - which material will be the best insulator? They took the first temperature, recorded it and then after approximately 10 minutes, they took the temperature again to see how much energy was lost based on how they insulated their cup.

Kerri Constant, Associate Director of curriculum alignment with the Girl Scout Council of eastern Massachusetts, pointed out, “Today is a great platform with female mentors in the field. Girls love to solve problems- it’s a key thing for them and once they get involved, they love it. It helps them with their aspirations. This is a perfect time for them discovering who they are.”

Constant said she was pleased to see 30 girls active in the summer as the Girl Scouts has a very vibrant STEM and engineering portfolio. In their community based after school program, the 8 week program on engineering and design that reaches 2500 girls. And in March and April, the Girl Scouts holds a STEM conference for girls in middle and high school.

“I’d love to partner with ASME more on this type of program. It’s very important for these young girls to have female engineers as role models and to see engineers who are local and in their community. It’s not just about the math and science, but how they can make a difference in their community. It helps break the stereotype, and they see women who have similar interests.”

“Today is about getting girls excited about engineering at a young age, and showing them that it’s an option for them as an area of study and/or career. The girls that are here signed up because they wanted to learn more about mechanical engineering. They seem really excited and engaged in the activities and topics we planned. They have natural drawing and building skills, and could be great engineers one day,” said Kate Fu, ASME member and Assistant Professor of ME and Industrial design at Georgia Tech.

ASME member Kathy Jacobson, a retired Lockheed Martin engineer was a Girl Scouts leader for years. “I saw that there weren’t any engineering badges for the girls, so we found several interested ASME members who shared our vision and started a process to investigate getting some engineering badge content. “

The team met via Skype over the last few months as they’re all from different parts of the country. They looked at the age appropriateness of activities to make it so the girls would get the most out of the workshops. They wanted to make it fun, interesting and hands-on so the girls would walk away saying “I want to be an engineer.”

“One of my favorite things at this workshop was when I gave the first girl a paper, she immediately asked “can I make a paper airplane?” That’s the sign of a future engineer! Even if the girls here do not go on the path towards engineering, it’s great to see them excited at this workshop,” said de Vries.

For Further Discussion
Today is about getting girls excited about engineering at a young age, and showing them that it’s an option for them as an area of study and/or career.Prof. Kate Fu, Georgia Tech