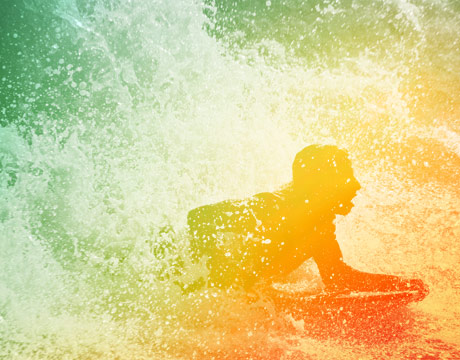 Getting Your Body Into It

Ben Severson has been among the elite body boarders of the world—and he shares his passion by designing boards for his peers.

Though they’ve been around in one form or another for much longer, Severson says the bodyboard design we know today is largely due to Tom Morey’s work in the 1970s. “He took some packaging foam and recreated the shape and design of the paipo board in a modern soft foam product,” Severson says. “His design incorporated the ability to change the rocker of the board, the curve from the front to the back of the board. Think of a boat hull—some are flat bottom, some have a lot of curve from nose to back. It’s amazing what you can do with a bodyboard.”

And what Severson could do was bring his own experience and instinct to the creative process. Here’s his design philosophy. “I start my initial design fabricating it custom to the person,” says Severson, who makes his home in Hawaii. “You start with their height and weight but then it’s also understanding the riding conditions they’re dealing with and what they want. The straight line design is faster but, you go curvier, and it becomes more maneuverable. Also, the placement of the wide point. I do it where your elbow rests on the board. Or if doing drop-knee style, then lower to where knee is on the board. Drop-knee style usually puts a little bit more curve into the board and puts the width of the nose in a bit more so it doesn’t catch and cause pearling.”

The machinery used to create the boards is mostly custom built, he says. “You basically have a core material, then you have a skin between one eight of an inch and one fourth of an inch that’s heat laminated to that material,” he says. “Those are done with industrial laminator rollers at about 800 degrees with a certain amount of pounds of pressure.”

He says making channels in the board can be done many ways. One way is proprietary machineries or you could go by hand using anything from belt sanders to jigsaws. Severson likes to use a rounded rail that he calls a transitional rail. According to his company’s website, this allows the board to go against shearing off water, which it says can slow the board down. It also states that the rounded rail system improves turning efficiency.

Severson says the material has changed in terms of flexibility. “You used to be able to bend it over and touch the nose of the board to the tail of the board without it breaking,” he says. “You now have composite rods in them to keep the board stiffer so when people do big aerial maneuvers it doesn’t fold boards in half.” He adds that the material is more of a crispier foam than a spongy foam, which he says leads to a better performance.

For Severson, his thrill is from watching someone find that better performance in the sport he’s known for decades. “Everybody talks about the importance of job satisfaction,” he says. “For me, you see somebody that has been using the wrong equipment and to then help design for them and their riding, that’s my love. When I hear someone say, ‘I can’t believe how much better and faster I’m going,’ that’s what it’s all about.”

For Further Discussion
When I hear someone say, ‘I can’t believe how much better and faster I’m going,’ that’s what it’s all about.Ben Severson, Ben Severson Designs