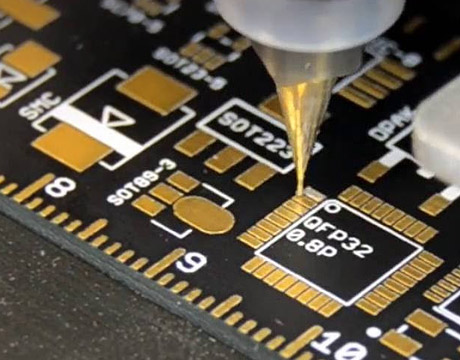 A 3D printer can create one or two-sided circuit boards in minutes. Image: Voltera

Getting on the Board

Jesus Zozaya is quick to mention a major problem when producing circuit boards: time. “You need one that works for you and you can be at the mercy of when it will be created and when it will arrive,” he says. “That doesn’t help when you need to move forward.”

As a co-founder of Voltera, he’s been a part of a journey to put the customer further in control while maneuvering through the realities of business. “It started for us [his team] as students from the University of Waterloo in 2013 for a fourth year design project,” he says. “3D printing was already quite popular. My partner brought up that there are a lot of 3D printers out there that are using plastic to create mechanical components so why not use ink of some sort to create electrical components?”

This was the project that was chosen and many different technologies were tried, starting with Inkjet. “We finally settled on a process similar to an extrusion-based technology where we have conductive ink in a cartridge, basically just regular syringes, and it gets extruded by applying mechanical pressure through a very small nozzle,” he explains. “We put a lot of effort into trying to find the right type of inks and chemistry to allow us to create very high resolution circuitry while still having excellent electrical property and the ability to solder. There are many inks out there but not all can solder and that can be a big problem.”

They graduated, received free space in an incubator at the University at Waterloo and, from that point on, started a company, he says. “We eventually went into the R&D phase and then got accepted into an accelerator which meant 3 or 4 months in China. And we took all the team members we had at the time,” he says. “It was a very rewarding process where we learned about injection, molding, extrusion, and more. By the time the accelerator was finished, we had a functional prototype that worked and looked good.”

They would go on to use Kickstarter, where over a 30-day period, people could pre-order printers.

“It felt great to get that kind of response,” he says

The present version of the product has a 550-watt heater to cure the ink, along with rails that allow XY motion. “The control PCB [printed circuit board] is the brains of the machine that allows communication through USB, and it controls motors,” he says.

This version is meant to be a prototyping tool. “It’s for allowing you to iterate much faster, not for the final product of your client," he notes. The cost? “Printing a board on this printer is maybe a dollar or two compared to ordering a circuit board that could cost 100 to 200 dollars,” he points out.The price to buy the printer is $2,199.

One of the potential improvements for the future, he says, would be in how many layers can be printed. “The cost of compact circuit boards you find in very tight spaces is four layers or more,” he says. “We’re also playing around with having additional components. Right now the printer doesn’t have a drill so we’re thinking of having a drill module or a pick-and-place module.”

Zozaya says it’s also the team that wants to continue to grow in terms of its methods in business.

“It’s been a rollercoaster from college,” he says. “There have been moments that were tough along the way but it comes down to how stubborn you’re willing to be. You need to be aware of what you don’t know and have hungry minds to adapt to circumstances. We’ve learned a lot.”

It’s been a rollercoaster from college. There have been moments that were tough along the way but it comes down to how stubborn you’re willing to be.Jesus Zozaya, Voltera