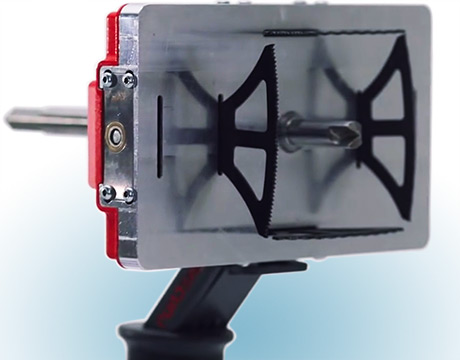 Getting It Squared Away

Growing up in his village in the African country of Eritrea, Michael Sebhatu was exposed to many products that gave him an appreciation for engineering, including water pumps. From a family with its share of irrigation farmers, in fact, he knew the path he wanted to take very early on.

“When I was ten or eleven years old, I developed an interest to study and become an engineer,” he says. Walking tens of kilometers just to get to school, he would find himself working at his brother’s engineering firm in Ethiopia at just 15 years old. “I was always curious about how things were made and how things worked.”

Lessons in persistence and engineering would lay the groundwork for creating the “QUADSAW,” touted as the world’s first tool that can drill a truly square hole. That is, persistence and a curiosity when it came to a particular electrician’s work. Sebhatu observed an electrician friend and asked about using a square hole cutter, considering the shape ultimately required. The electrician’s response let him know that he didn’t think one existed.

Sebhatu, later co-founder of the company putting out the invention, was out to change that. Starting roughly seven years ago, he needed a mechanical system for a square cutout. Using CAD software to simulate the movement, the QUADSAW, harnessing four blades, was created.

The product, which would go on to win the Industry Times Tool of the Year award, comes in two different forms, one that conforms to US electrical sockets and countries with the same specifications, and the other for the UK, where the company he cofounded is located (along with other countries with the same specs). The tool cuts up to 35 millimeters deep, for drywall, for example, and in development are new blades for different kinds of wood and for extremely hard cement-type boards.

“The QUADSAW uses a novel system that allows for the simultaneous reciprocation of four independent blades to create a ninety degree square cut opening,” explains Ean Brown, director of GeniusIP, which is the company that will put out the invention. Its price is projected to go for what would convert to a little more than $400at press time. At present, the QUADSAW can perform a cut in under 10 seconds, he says.

One of the last improvements was actually to the grease. “You don’t think about it but it actually took a massive amount of research,” Brown says. “The grease is needed for tension, for how it behaves under heat, so many factors in what would happen to QUADSAW when it’s working.”

Cut Out for Success?

Testing participants have run the gamut, from developers to electricians, and the company has found the response to be very positive. But with QUADSAW slated to roll out in the first quarter of 2018 in the UK and before the end of the year in the US, the real test begins when it reaches market.

For Sebhatu, who has a BNG degree in mechanical engineering from Kingston University, UK, and an M.Sc. in product design from South Bank University, UK, says he can’t wait for his invention to get its chance with the general public and to enjoy a moment which, in some ways, started from his childhood days of engineering curiosity.

“It’s like watching your own baby grow,” Sebhatu says proudly.

For Further Discussion
The QUADSAW uses a novel system that allows for the simultaneous reciprocation of four independent blades to create a ninety degree square cut opening.Ean Brown, GeniusIP