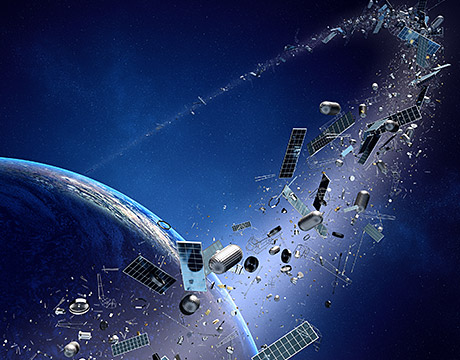 Getting a Grip on Garbage

Researchers have explored many questions when it comes to space travel: Where will humans live? What kinds of foods will they eat? And more. But answering the question of how humans will dispose of all the garbage they create in space? That’s a question that hasn’t been given very much thought, until now.

Hao Jiang, a graduate student at Stanford University, is part of a team that has taken the research done at the school on the Eublepharis macularius, or the gecko,and looked at ways it can be applied to space refuse.

“There was the gecko adhesive work [done at Stanford] and a lab alumnus graduated and went to NASA’s Jet Propulsion Laboratory, taking the technology with him,” he says. “When you want to grab something or recycle space junk, things are floating [in space] and there isn’t any existing technology to handle it well. With gecko adhesives, maybe it could be different.”

The gecko, known for the stickiness of its limbs, has long been a fascination for researchers, and Jiang and his team used the gecko as the model for their device.

“The gripper, inspired by the gecko, has a large array of modules to work with,” he says. “Upper level above it, is like a non-linear wrist that can take care of loading conditions. Eventually we’re looking to put in a robotic arm to interface with this gripper. For the gripper, if the astronaut is holding it, it has a handle affixed at the wrist and they attach the gripper to the target object, such as space junk, and it has a sensor to detect when it contacts with the object or aligns with the object, and it tightens at the wrist. When you grip, it feels stiff grasping and after that, you feel like the object is together with you so you can move the object around.”

The object sticks to the target because of the silicon material used on the device’s adhesive pads, he says, but adds that what really matters is the microscopic structure of the silicon, similar to how the gecko’s hair structure is the key to its stickiness.

“You don’t need to push with significant force for this, you just need a light touch,” says Jiang. To make sure the load is as even as possible, they use a pulley system for the pads.

To test how much force or movement the grippers can handle, the team went over to the Jet Propulsion Lab’s “Robodrome,” where two robots, each weighing 800 pounds, were floating on an air-hockey-like floor, simulating zero gravity. The gripper was attached to one robot and the team used it to drag the other robot around.

The device was also tested extensively on zero-gravity airplane flights. “We did 80 flights with about twenty to thirty seconds of zero-gravity time and then we tried to float the target object and grasp the object with the gripper,” he says, “Reaching even 2Gs, there was a letting go and grasping of objects, ones that were similar to a fuel tank, beach ball, and ice cube. The results so far show a good deal of potential.”

For Further Discussion
When you grip, it feels stiff grasping and after that, you feel like the object is together with you so you can move the object around.Hao Jiang, Stanford University