Get in (the Assembly) Line

Get in (the Assembly) Line 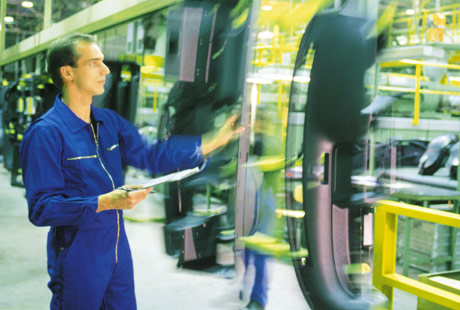 The assembly line did nothing short of completely change the history of business—but it didn't end there. Lines are still a vital part of industry and are an area for engineers to consider.

If, when thinking of the assembly lines, you envision those made famous by the Ford Model T, you're not alone. With next year marking the 100th anniversary of that continuous line, it set a standard but might also have inspired unnecessary bulk in future lines, says Trevor Johnson, president of Innomation Technologies, Stony Point, ON, Canada.

"The most important assembly lines may be the simplest," he says. "There's a tendency to make things complex because it's impressive, but it's also costly. People see an [automotive] assembly line with tracks 12 miles long on the floor carrying bodies around but much of any production can be subcomponents. For small stuff, [the assembly] may have a motor in it and all it's doing is moving a two-pound box from one spot to the other for a $200,000 investment."

Johnson says it is about stepping back and asking if you can create a line where much of the building of the product is done by hand. This also tends to create a safer line, he says. "When you have a system that's relatively frictionless, you could have something weigh 50 pounds that only requires four to five pounds to push with the 10:1 ratio of moving something on a rolling system," he says.

For Johnson, a good part of creating an assembly line is done before any physical building ever begins. "3D design is vital because, with the pictorial representation of an object, most 3D allows you to see interferences," he says. "If there's a hinge, one can see how far it can swing until it hits something or point out things that are incorrect or incompatible. We use software called Inventor."

Robotics also have their place when considering assembly lines, Johnson says, but, selectively. "We would use it typically for jobs that are physically heavy, or dangerous, or inaccessible," he says. "You might use a robot for carrying around a car seat or could use it for loading a mold where exposed to risk. Saving a worker from chemical exposure is really one of its most important uses."

Johnson believes the mechanical engineering components for assembly line success are 25% theory and 75% experience. "There's an art to it that goes beyond what you can learn in school and it comes from a passion for making a successful machine," he says. "When you truly make automation work at its finest, there isn't anything like it."

Of course, that's not to say that Johnson and others don't still have to tip their cap to the innovation of that Old Model T line, which reduced the time it took to make a car to the single digits in hours. A video from the History Channel's web site gives you contrasting visuals on the transition from humble line beginnings to the technology of today.

There's an art to it that goes beyond what you can learn in school and it comes from a passion for making a successful machine.Trevor Johnson, president, Innomation Technologies