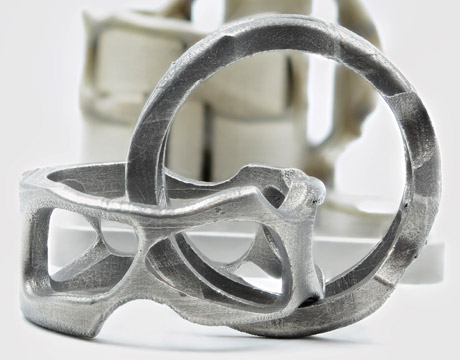 Researchers are developing a technique that promises to make manufacturing of metal components more efficient and less costly. Image: ASU

If it hadn’t been for a bit of serendipity, Owen Hildreth may never have thought about solving a problem that has developed into a potentially game-changing 3D printing method, promising to overcome a major challenge in producing metal objects.

Some two years ago, Hildreth, an assistant professor of mechanical and aerospace engineering in Arizona State University’s engineering school, was attending a seminar on additive manufacturing. The presenter mentioned how hard it is to remove required metal supports when 3D printing metal, then showed a humorous sketch of someone trying to whack out the supports and jokingly asked if anyone knew of a water-soluble metal.

“Everybody chuckled,” Hildreth says. But not Hildreth. With a background in selective metal etching, he thought, “I can do that. Most metals are actually chemically soluble if the ph is low enough. It’s not that hard. So I started working on it professionally, and that’s how I got into it.”

That offhand quip has resulted in work enabling 3D printing of a metal object and then selectively dissolving the support material after the object is printed with a simple electrochemical etching technique.

If the presenter hadn’t made that joke, Hildreth doesn’t think he would have thought about the problem. “My background is not in metal additive manufacturing. My background is in nanoscale etching phenomena,” he says. “So I had a lot of experience finetuning a local environment to make a highly localized chemical etching reaction. It comes down to being in the right place at the right time and having a background that made me think about the problem in a different way.”

Others have focused on making the supports easier to remove from a design standpoint, to change the shape, the area of contact or number of supports.

Hildreth says 3D printing of metal objects, whether components or larger devices with particularly complex designs, has posed a big challenge not faced by plastics. Support material for plastics can easily be cut off, melted, or dissolved. With metals, they have to be machined or beveled off, a process involving laborious and costly machining techniques, he points out.

Last year, Hildreth and his collaborators had their first breakthrough by 3D printing a stainless steel arch supported in the center by carbon steel. The carbon steel was electrochemically removed in a mixture of nitric acid with bubbling oxygen. “The stainless steel is very chemically resistant. The carbon steel is not,” Hildreth says. That greatly reduces the post-processing required to remove support structures from 3D-printed metal components.

But the team didn’t stop there and went on to develop a method that brings dissolvable support capabilities to additive manufacturing systems that are limited to a single-material, such as the powder bed fusion printing technique, “one that everybody in industry uses,” Hildreth says.

The team developed a method of removing the support by introducing a sensitizing agent into the built part when it goes through annealing, a post-printing heat process to remove stresses that occur during printing. “We add some chemicals during the heat treatment which diffuses into the component and the support, and it changes the composition of the top 100 microns or so of the entire built part,” transforming that layer into carbon steel, he explains.

Because the supports are only a few hundred microns wide, they are totally dissolved by the chemical. Components are usually rather large, at least several centimeters or inches, and losing 100 or so microns of material “is no big deal,” Hildreth said. The team described the study and process in a paper published online recently.

After printing a part of two interlocking rings with each ring about four centimeters wide and successfully removing the supports with the new technique, Hildreth got a quote from a machine shop of the cost of machining away the supports: $4,000 and five days.

“We did it for less than a dollar’s worth of chemicals and in significantly less time. A lot of time on a build platform, you might have eighty parts. If you had 80 of these you are talking about $320,000 worth of machine shop time just to remove the supports. Plus hundreds of man hours. This technology allows us to do all eighty parts at once for probably less than $10 with acid, and it takes five minutes to brush off some excess ‘dust,’” Hildreth says.

Although the process took Hildreth 32 hours, he says it’s likely to take about 7 to 10 hours on higher quality equipment. “We’re working on getting that time down.” Next, the team is working on understanding and controlling the process better and improving the part in other ways to control surface finish and smoothness so that the part will perform better. The team also plans to develop the process for other materials.

“We’re fairly certain our method is going to be applicable to a broad range of metals used in manufacturing,” Hildreth says.

It comes down to being in the right place at the right time and having a background that made me think about the problem in a different way.Prof. Owen Hildreth, Arizona State University

In an Engineering Minute: Key Advantages of On-Demand vs. Traditional Manufacturing