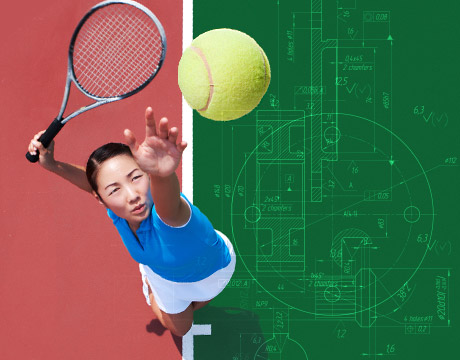 The racket weaves upward through the air, connecting at just the right point, creating speed, spin, and an angle to put the serve just in bounds. Yet here comes a ball over the net again: speed, spin, angle, in bounds. Ball after ball, perfectly served. Who on Earth are you playing? The second coming of McEnroe?

As you may have guessed, this “playing partner” is a tennis ball machine. But how is it engineered to do what it does? Doug Boehner, cofounder of Verdi, NV-based company Sports Attack, explains how it works and how his machine does something very rare and nearly unique.

Boehner spent his career in athletics, even working as an athletic director at a high school for a time. When he had a chance encounter with one of the pioneers of baseball pitching machine technology, Larry Ponza, they turned their energies to, among other things, the tennis ball machine.

But this machine does than just fire balls over a net, it was developed to mimic the serve. “I talked to enough people, even at the university coaching level, and a machine that could serve was seen as very attractive,” he says. By the machine’s release point height going as high as eight to nine feet, it recreates the high point of the serve—a height achieved by a jump and extension of the player.

“It needed to go to serving height but also then ground stroke height,” he explains. “We solved that by taking the balls up with the machine so the ball source rises with the serve and lowers with the ground. Kick serves also are important so you need overspin to the right and left and you could only do that by having three wheels. By having three wheels, you could move that spin axis 360 degrees and get whatever you wanted. For raising the head, we tried scissors, hydraulics, springs, and bungee cords but ended up with an actuator which actually lifts an arm and lifts the head.”

The machine has a reservoir of balls at ground stroke mode or high in the air and, inside the bin, it has a method of releasing the balls one at a time, he says. “It has to be indexed, and we needed a timing element that has electronics to control the interval. Once indexed, we put the bin higher than the machine so gravity would feed them down after they were indexed into the throwing wheels. We have variable speed motors and mounted on the shafts are these wheels and it forms a chute between the three. We make it so the ball gets pinched or wedged as the wheels are revolving and that propels the ball.”

The design is also open while many tennis ball machines are in a box-like structure without a top, he says. “This open design I believe allows you to prepare for the ball better,” he says. “A ball just coming out and going after it; I don’t think that’s as realistic when you’re talking about a match.”

With serves reaching speeds Boehner estimates around 130 mph at the highest (which comes from moving the machine up closer than the baseline), the machine reaches a level that crosses over into professional tennis player speeds. When you consider that many a tennis match can go back and forth until someone achieves a break (a term for winning a game when someone else is serving), the extra precision at receiving a serve could easily be the difference between raising the winner’s trophy or watching victory go to another.

Sports Attack’s tennis ball machine has counted the Stanford University tennis team among its users, as well as several players who have played at the professional tour level.

“A big part of my life has been sports and there is something very satisfying about seeing someone get better,” says Boehner. “You see the games but people forget most of the time is spent practicing. Developing something that gives them an added edge, it’s easy to have a passion for it.”

You see the games but people forget most of the time is spent practicing. Developing something that gives them an added edge, it’s easy to have a passion for it. Doug Boehner, cofounder, Sports Attack