From Seed to Fruit, with David Blivin

From Seed to Fruit, with David Blivin 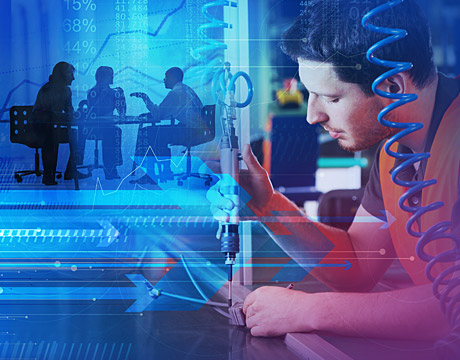 There are a lot of technology companies that owe their existence and success to David Blivin. He’s the co-founder and managing director of Cottonwood Technology Fund, based in Los Alamos. Before he set up shop in New Mexico, he raised funds for technology companies in the southeast with Southeast Interactive, which he also founded and served as managing director. There he had his hand in more than a billion dollars worth of fund raising and exit transactions.

Q: Can you describe the process of how your organization decides what to fund?

DB: We really look for strong IP/science-based investments. Further, we look for innovation that we describe as off the innovation curve. These are situations where a unique approach is being developed, with the potential to disrupt the current incumbents and approaches if successful.

Q: Do you ever take on projects that you might consider risky simply because you personally (or as a group) would love to see the product become a reality?

DB: That probably describes every investment we make. We’re generally involved as founding capital behind the companies and innovations that we back. At this stage, all risks are still on the table. In every case, if these technologies reach the marketplace we believe the impact can be significant.

Q: In the complicated world of nano and micro engineering how do you determine if something is truly viable?

DB: We are generally testing the market need for these technologies with our extensive network of corporate relationships. In all cases so far, the technology has worked and the products have been successfully developed. What becomes the bigger challenge is market acceptance. Because these solutions have never been seen before there is a natural reluctance by industry to switch from their current tried-and-true approaches. As a result we have to plan for extra time to educate the customer targets and for them to validate the technology performance with their own engineers.

Q: For some products the science can be quite sound, but the cost to manufacture is hard to determine. How do you weigh these unknowables?

DB: At the stage that we invest, you are correct, the manufacturing details are largely unknowable. We try to keep this up front as the product is being developed so that manufacturability and scalability are being constantly considered along the development path.

Q: Since you often work to bring in additional funding, do you find yourself as deeply immersed in the ideas—and, ultimately, as well versed in the science—as the original idea generators?

DB: The majority of our next rounds of funding have come from strategic/corporate investors. This occurs because we involve them early, even in our evaluation process. Because of the inherent disruptive potential, if the corporations first support the market opportunity for the technology and then see that it works when they receive initial samples or prototypes. The natural evolution of the discussion becomes financially supporting the company’s success. We don’t really have to become experts in the science. We become experts in the market applications and market sizes for the science. Ultimately investors look to make money, so it’s more about the market opportunity than about the science itself.

Q: You called the management team the most critical piece. Can you talk about how that might not be obvious to entrepreneurs? Are they often put off by the suggestion you’ve made that “the science is the easy part”?

DB: One of the reasons we invest more in the beginning than many seed stage investors is to team a business person or team with the technology team at the beginning. Almost always with IP based technology companies, the founders are going to be technologists. Many believe the technology will sell itself because it is so compelling versus the current solutions; that if they build the product, the market will beat a path to their door. After we meet with them they generally begin to understand that the market/adoption risk is real and challenging. The more unique the technology the more true this is. So the adoption challenges are proportional to how disruptive the technology can become. The more disruptive, the harder it is, which is counterintuitive to many. Ultimately, we only invest when we can come to a meeting of the minds in this regard.

Q: Similarly, you’ve said that it’s not always the best ideas but the best people who get funded. How should entrepreneurs work this into their proposals? Do you consider yourself, then, more of a talent scout?

DB: At the stage that we invest, the companies are still very technologist heavy. The uniqueness of the solutions means they are by default some of the best people in their field. So we generally start with seeking compelling science with large market opportunities. Then we begin to consider the team needed to successfully build the company. The founders can almost always build the product, as I indicated earlier, but they can’t always build the company or sell the product. That’s where we focus on building a common vision for how the team will need to be built over time and what critical skills might be needed immediately. Then we want to work as partners to fill the boxes as resources allow over time. If we want to be world champions [of the NBA], do we not want LeBron James or Stephen Curry on our team because someone might have to step into a support role? We try to invest only when we are working with founders who are driven to see the company be successful ahead of their personal role and success. At the seed stages, or even later stages, entrepreneurs serve themselves well when they build into their presentations an honest assessment of what skills are already present in the company and what skills they want to recruit, with the emphasis on winning over self preservation and control. They should seek capital providers with a similar vision and a successful track record of partnering and working cooperatively toward company success.

DB: If they pick the right partners then control becomes less of an issue. Many times they can view investors as seeking control to ensure their returns. But in truth that almost never works out for the investors if that is their approach. We have no desire to run the company and of course are never technical equivalents who could step in to complete the product development. If we don’t leave sufficient incentive and motivation for the key people to work in their own self-interest, not to make us rich but make themselves rich, then the chances of success become less. So we approach entrepreneurs with a value proposition that includes more than our money, but also our extensive network to customers and additional capital, and our experience in partnering with other entrepreneurs to help them build successful companies. We encourage them to contact other entrepreneurs we’ve worked with to get comfortable with our ability to be a partner in helping create value. Once they understand that we’re there to help them maximize the potential of their idea and company, not to take it from them, control generally becomes less important.