Fresh as a Robot Daisy

Fresh as a Robot Daisy 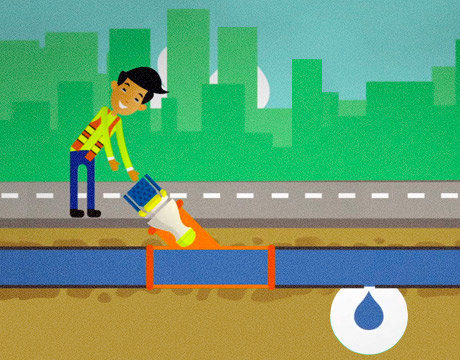 Engineers have developed a robot that can map out leaks in city water distribution pipes. Image: MIT

Many of us take the water supply for granted. Want a drink? Hit the faucet. Part of the reason for this ease of use is that water leaks in the U.S. are rarely a problem. But in other parts of the world, it can be a different story.

Infrastructures in the developing world aren’t always as reliable as those in the U.S., and the consequence of a leak can be grave, with contamination being a serious problem. Now a team at the Massachusetts Institute of Technology is hoping to level the playing field without leveling budgets with “Robot Daisy,” a robotic system with the eyes of a plumber and the swimming prowess of a lifeguard.

Going with the Flow

“Presently, many water companies find leaks with products such as microphones in a cup, which can listen for water leaks, but it takes a lot of time,” says You Wu, a Ph.D. candidate in mechanical engineering at MIT. “With this [system], you insert [the robot] into the water system and it just flows. We don’t control it in any way. The size of the water system will have an effect on how many times it has to be put in to have a chance to search for these leaks.”

Current methods in other areas of the world are usually good at detecting big leaks of more than 10 gallons per minute, Wu says. However, Robot Daisy can find leaks as small as one gallon per minute. A shower, for example, flows at three to four gallons per minute, he says.

The robot wears a skirt of sensors, which relay information on the force of leaks it locates, all triggered by the force of the water pulling on the skirt. The robot is partially made of rubber to help squeeze through the pipes, while also having room for microcontrollers, batteries, and Wi-Fi.

The robot can be inserted into a pipe by going under a fire hydrant. “The robot can twist and bend to get through the pipes in a tetherless fashion,” Wu says of the creation, which won the 2017 MIT Water Innovation Prize. “When we take it out, we can download the data on what happened during the exploration. It tells us where the robot has been, where the leak is, and how big it is.”

The system will help address the issue of contamination. “In Boston, for example, it’s less of an issue because water systems here are highly pressurized,” Wu says. “But in developing nations where a water leak is really bad, those contaminations from outside the pipe can go back into the pipe and contaminate the water.”

Testing has even brought Robot Daisy to a facility in Saudi Arabia that created an artificial leak to see how the system performed. After testing the robot more than 10 times, the feedback was encouraging, Wu says, adding that the robot’s technology may someday be used to find leaks in gas pipes.

“The next phase is looking at making a single robot that can fix leaks on the pipe once it stops and recognizes the leak,” he says. “It would do so much for [developing] areas to be able to put it in and have the problem just be solved.”

For Further Discussion
It would do so much for [developing] areas to be able to put it in and have the problem just be solved.Prof. You Wu, MIT