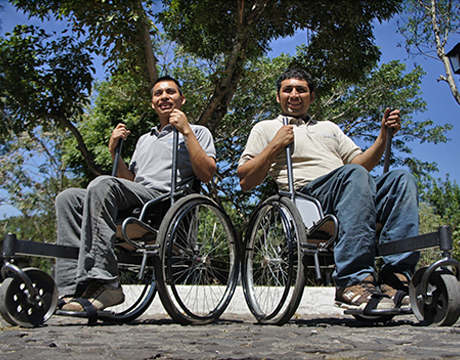 Freeing The Disabled From Some Of Their Restraints

Wheelchair users are a key consideration in built environments in the United States and other developed nations. Most urban areas are highly accessible to people with mobility-based disabilities via ramps, sidewalks, elevators and public transit.

But this isn't the case in most parts of the developing world – a reality that creates a daily struggle for its tens of millions of people requiring wheelchairs. Paved roads and sidewalks are a rarity, for example. In turn, wheelchair users are greatly restricted in their ability to support themselves and live independently.

A team of engineers from MIT set out to build a device that would meet the complete mobility needs of people with disabilities in the developing world. Understanding that conventional wheelchairs only provided limited mobility to these individuals in their communities, the team produced the "Leveraged Freedom Chair": a three-wheeled wheelchair that is propelled through a lever-powered drivetrain.

Once a prototype had been assembled, the engineering team tested the product with participants in field trials in East Africa, Vietnam, Guatemala, and India. These stakeholders played an integral role in the product's final design development by helping to identify failures in the "heavy, unstable and awkward to get into" prototype. They were also credited with recommending a number of features that the engineering team ultimately used in the final version.

This case study highlights the necessity of stakeholder involvement in successful developing-world-product design.