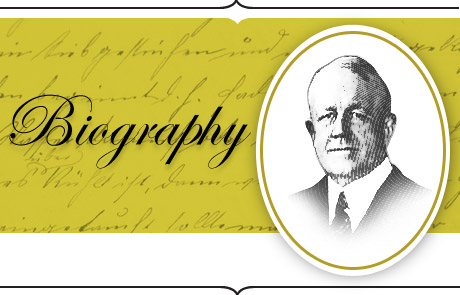 A mechanical engineer and an early member of the ASME, Frank Gilbreth is considered by many to be the Father of Management Engineering.

Born in Fairfield, ME, on July 7, 1868, Gilbreth broke into the construction industry as a bricklayer shortly after his high school graduation. In the course of his work, Gilbreth observed that each bricklayer approached his job differently, some seemingly more efficient than others. He then began analyzing their motions to determine which approach to bricklaying was the best. Hence, his pioneering work in motion analysis and how it was applied to the workforce was under way. Over the years he developed many improvements in bricklaying. He invented a scaffold that was easily adjusted to allow the worker to be at the most advantageous level at all times. He created a system whereby bricks were stacked on the scaffold in such a manner that the worker could easily pick up a brick in one hand and mortar in the other. As a result, his improvements reduced the number of motions made in laying a brick from 18 to 4 ½, making a dramatic increase in worker productivity.

Gilbreth learned every trade in the construction business and advanced to superintendent without the typical three years of apprentice work. At the age of 27, Gilbreth started his own contracting firm, where he patented many inventions, including a concrete mixer and concrete conveyor system. He adopted the slogan "Speed Work" for his company and expressed his goals as the elimination of waste, the conservation of ability, and the reduction of cost. He was lauded for the application of these principles in the rapid construction of the Augustus Lowell Laboratory of Electrical Engineering for the Massachusetts Institute of Technology. His company was involved in a variety of construction projects, including dams, canals, houses, factory buildings, and an industrial facility. He eventually expanded his business to England.

Gilbreth had the good fortune to meet Lillian Evelyn Moller and they married in 1904. In addition to raising 12 children and being the subject of the Hollywood movie, Cheaper by the Dozen, they became one of the great husband-wife teams of science and engineering. Together, they collaborated on the development of micromotion study as an engineering and management technique and introduced the application of psychology to industrial management. They saw the need to improve worker satisfaction, which would in turn improve overall job performance and worker efficiency. Gilbreth designed systems to ease worker fatigue and increase productivity by studying each movement a worker made, and in doing so, document the best way to perform the task. They also considered the physical comfort of the worker and their innovations in office furniture led to the study of ergonomics.

In 1907, Gilbreth met engineer and inventor Frederick Winslow Taylor and became a proponent of the Taylor System of time study. Frank and Lillian were instrumental in the creating the Taylor Society. In 1912, the Gilbreths left the construction industry to focus their efforts on scientific management consulting. They broke with Taylor in 1914 and formed their own scientific management company with the intent to focus on the human element of management as well as the technical. They felt Taylor's "stop-watch" approach was primarily concerned with reducing process times whereas the Gilbreths focused on making processes more efficient by reducing the motions involved. The Gilbreths continued their micromotion studies in other fields, pioneering the use of motion pictures for studying various aspects of work and workers.

In the early months of World War I, Gilbreth studied industrial processes and machinery in Germany. As wounded soldiers began returning home, Gilbreth applied his principles to improving surgical procedures and was the first to use the motion-picture in the operating room for educational purposes. He was also the first to propose that a surgical nurse serve as a "caddy" to the surgeon by handing surgical instruments to the surgeon during a procedure. He also helped rehabilitate injured soldiers by developing ways to help them manage their daily activities.

In 1920, ASME instituted its Management Division, which Gilbreth had helped to establish. He became one of the most widely known engineers in the U.S. and Europe and reaped financial rewards and many professional honors. He suggested the inaugural international management congress that was held in Prague in 1924. He was stricken with a heart attack shortly after the conference and died on June 14, 1924, while traveling from his home in Montclair, NJ, to New York City.

In addition to raising 12 children and being the subject of the Hollywood movie, Cheaper by the Dozen, they [Gilbreth and wife] became one of the great husband-wife teams of science and engineering.