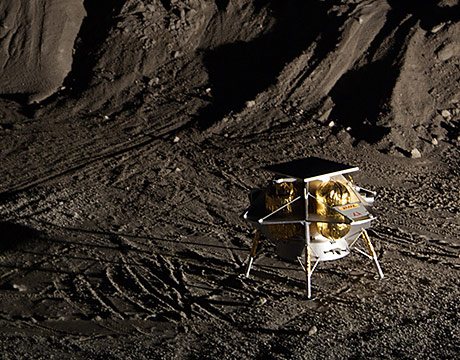 Four-Pound Robots to Rove in Space

Astrobotic Technology has a bold business model: to make space travel accessible to every country. The lunar logistics company recently took a big step toward that goal with its work on CubeRovers, small robotic rovers for extraterrestrial exploration and experimentation.

“Standard space exploration tools are behind the walls of big corporations and they’re expensive to buy or develop,” says Andrew Horchler, Astrobotic Technology’s principal researcher. “We’re working to develop rovers that can be used by university communities, companies, teams, and governments to explore space.”

The company has already developed its Peregrine Lander, to deliver payload to lunar surfaces and lunar orbit. The lander measures about eight feet wide by five feet tall.

In May, NASA selected the Pittsburgh company and its partner, Carnegie Mellon University, to develop the new class of small, lightweight rovers. The rovers will weigh in at about 4.5 pounds and will be produced in sizes that vary from about 10 to 20 centimeters tall and wide—the better to navigate lunar and planetary surfaces and communicate their findings, Horchler adds. They’ll also contain solar panels to power their operation.

To describe the rover program, Horchler called upon the example of CubeSats, miniaturized, inexpensive satellite platforms contained within 10-centimeter cubes. Developed about 20 years ago, they made low-earth-orbit accessible. Since their inception, the technology has helped standardize satellite parts as well as bring down their cost and availability, he says.

“Now CubeSat components and equipment can be bought online and parts can be interchanged with each other, making satellites much more accessible,” Horchler says.

Due to the laws of scaling and the concept of miniaturization, CubeRovers perform with as much computing power as their bigger brethren, Whittaker adds.

Teams of small rovers can survey more efficiently than a single, large rover. Mission risks can be reduced by spreading capabilities among multiple, low-cost rovers. CubeRovers acting as scouts, for instance, can identify safe paths into regions that are risky for large, expensive rovers, Whittaker says.

“A big rover muscles its way over terrain while a small one can go around, not just over. They can finesse the terrain,” he adds. “They also have greater mobility and agility due to their small size.”

The light, small robots could even be dropped from spacecraft to carry out their missions and report back, without the need for the craft to land on the lunar or planetary surface, Whittaker says.

The small rovers could be launched in pairs or teams and could communicate with each other, Horchler says.

“You could have one rover on a hill talking with another one in a crater that it could communicate with and send that information back to earth,” he says. “They can go places a large rover can’t risk exploring. Because they’re affordable they can be lost.”

“If we figure out how to power them there, they can even explore the dark side of the moon,” Horchler adds.

Because they have less surface area, CubeRovers can maintain lower temperatures in atmospheres, like that of the moon, where heat isn’t transferred from the robot the way it would be on earth, Horchler says.

“Heat is radiated out when you’re on the moon, but it’s an extremely slow and not an efficient process,” he says.

The university has been developing rover technology for decades, Whittaker says, adding that all rovers carry “some CMU DNA.” Last year, the university unveiled Andy, a four-wheeled robot designed to scramble up steep slopes and survive the temperature swings and high radiation encountered while exploring the moon’s pits, caves, and polar ice.

Whittaker’s robotics team came up with CubeRover technology as well as its basic design. Astrobotic will continue development. The company will demonstrate a prototype at the end of the year to win continuing NASA funding for development.

If all goes as planned, CubeRovers will be roving the moon, Mars, even other planets, and reporting back their findings in the not-too-distant future.

For Further Discussion
They can go places a large rover can’t risk exploring. Because they’re affordable they can be lost.Andrew Horchler, Astrobotic Technology