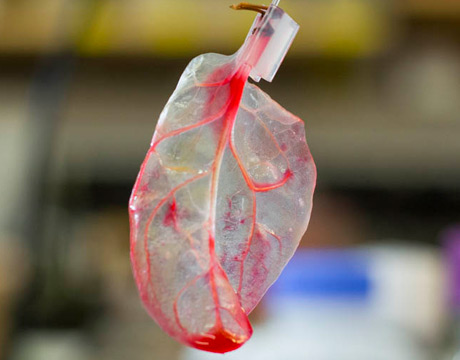 Foliage Gets the Blood Pumping

People and spinach share a few things in common, one of which is a vast, branching, vascular system.

For the human, that system carries blood; for the spinach, water. But, as researchers from the Worcester Polytechnic Institute have demonstrated, that doesn’t mean we can’t take the fluidic passageways of the leafy green and put them to use in our own venous network. Indeed, tomorrow’s artificial heart may be cruciferous.

Glenn Gaudette, a professor of biomedical engineering at the university, is an expert inmyocardial decellularization. His lab routinely injects hearts with a detergent that breaks down cell membranes and washes out all cellular material. What’s left is a limp, gel-like heart, free of DNA—pure vascular structure.

After visiting the Arkansas Biosciences Institute at Arkansas State University and seeing how they were manipulating plant tissue, Gaudette and his team started wondering if plants could be similarlydecellularized. Gaudette and graduate studentJoshua Gershlak were having lunch one day when they noticed that another student had some spinach on his plate. Gershlak asked to have a look at it.

“If you look at the leaf where it comes off the stem of the plant, there’s a little hole there,” says Gaudette. “We said, ‘Gee, can you stick a needle in and wash detergent in there?”

It turns out that you can, and they did. The process they used was almost identical to the one used with hearts. Only the strength of the detergent was lessened. At first glance it might seem that the leaf and the human heart are wildly different beasts. Where the spinach tears at the slightest nibble, the heart is more, hearty. But once stripped of all cellular material, the two are a lot alike.

Gaudette and Gershlak were able to seed the now-translucent spinach with beating heart cells. The result was a leaf with enough contractive power to actually move red dye through its vascular system.

Drained of DNA, the vegetable is unlikely to be rejected by a patient in need of a vascular implant. And plant cellulose comes preapproved for other medical applications. It will be some time before sufferers of heart disease swap their hearts for a well-seeded bundle of spinach.

“Before we start thinking about creating an artificial heart, we’re thinking about using the leaf structure as a patch,” says Gaudette. “After a heart attack, part of the heart wall no longer works. If we can fix just that region, hopefully those patients going into heart failure won’t need a new organ.”

Such a patch would be made by stacking leaves on top of each other. Unlike mammals, who need to push and pull the blood in their veins, the flow in leaves is one way. Some leaves may need to pump blood one direction, while other leaves push it back.

Needless to say, spinach is not the only plant with a potentially implantable vascular system. But, for the time being, it suits most of the lab’s needs.

“I’d like to see bigger veins,” says Gaudette. “My graduate student puts the needle in and he’s OK with it. I’m a little older and can’t see as well anymore.” Still, the research has changed how he sees the vegetation around him.

“When I eat a salad and I look at iceberg lettuce and see a big hole down the middle, I tell my wife ‘Wow that would be good in a lab.’ Not the best dinner conversation.”

Though the beating spinach heart may seem strange and futuristic, Gaudette is quick to point out that none of the techniques used to make it happen are new.

“Spinach has been there,” he says. “It’s been right there in front of us. The decellularization process has been there. Seeding and growing cells too. What we did is bring all these things together. I’d really like our students to use this as an example when building a new submarine or designing a new car, whatever it is. Developing that entrepreneurial mindset—being curious about other things.”

Spinach has been there. It’s been right there in front of us. The decellularization process has been there. Seeding and growing cells too. What we did is bring all these things together.Prof. Glenn Gaudette, Worcester Polytechnic Institute