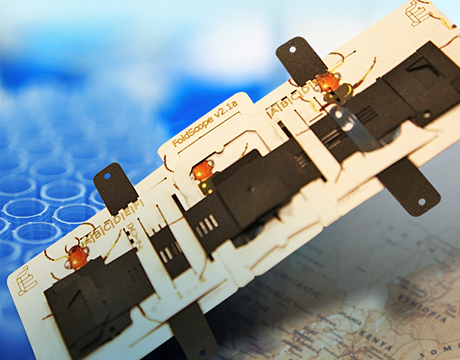 Microscopes are a basic tool of doctors and scientists of every discipline. They are ubiquitous in laboratories around the world. But all microscopes are not alike, varying in cost and complexity, and a team of researchers discovered that in places where they might be needed the most, the tool is never used, either from complexity or lack of training. So they developed a folding microscope, made from paper and based on the concepts of origami, at a cost of about 50 cents.

Manu Prakash, an assistant professor of bioengineering at Stanford University, and his team of graduate students, developed Foldscope to get low-cost serviceable equipment in the hands of front-line health care providers in developing countries. Now, they are also trying to put the scope in the hands of elementary school children around the globe. Prakash just completed the first phase of the “10,000 Microscopes” project, in accepting proposals from 10,000 people around the globe with wide-ranging ideas of how they could use the tool. The team plans to provide every one with a Foldscope to pursue their project.

“In the field in India and Thailand, I saw donated research microscopes just sitting there, covered with mold or something,” he says. “They had no way to maintain them, and the annual salary [of a health-care provider] times ten is still more than the cost of the tool. We need to build tools to deploy in a much larger context.”

Prakash runs a laboratory at Stanford, and challenged his students to devise alternatives. He lectured on the physics behind microscopes and folding, and credits graduate student James Cybulski with refining the idea. “There are a lot mechanics is how this is built,” he says. “By the act of human folding, you can get a really precise optical alignment, out of origami.”

The kit can be folded and constructed in about 20 minutes. There are not any moving parts, and it packs flat. The components are printed on A4 paper, perforated and color-coded. There is no instruction sheet either. It is extremely rugged—Prakash has thrown one out of a three-story building—and can be incinerated after use to destroy any potential pathogens. But to keep costs down, the design depends on low-cost spherical lenses rather than precision-ground lenses used in research or other microscopes.

“The goal is to make it easy for the user for a diagnostic perspective,” says Prakash. “There’s usually a lot bells and whistles that front-line workers are not able use.”

Prakash says one of the thrusts of his lab is development of what he calls “frugal science,” and the development of cheaper tools and scaling up for manufacturing. Another project is building tools that are “disease specific.”

To use a Foldscope, a sample is put on a microscope slide and wedged between two slats, or paper layers of the microscope. Using a thumb and forefinger to grasp each end of the paper strip, the user puts an eye to the micro lens and focuses by sliding and flexing the strip. The tool can reach magnifications of 2,000x, Prakash says.

Using a watch battery to power different LED lights, the Foldscope also can be configured to target specific organisms related to a disease. Prakash says the tool’s initial promise is in detecting diseases that include malaria, African sleeping sickness, schistosomiasis and Chagas. The scope also can be modified for bright-field, multiflourescence or projection microscopy.

“There are many different types of microscopes,” he says. “A microscope is a mechanism with precisely made components that need to come together. Folding was the mechanism to do that without three-dimensional parts.”

Prakash has been working with small grants from the Centers for Global Health and the Gates Foundation, which he is looking to renew at a higher level to build on the 10,000 Microscopes project. He couldn’t be happier with the results; within two to three weeks earlier this spring, people from 130 countries signed up. Applicants merely had to propose how they would use the tool and how it would work within their community. Concurrently, the team is conducting field trials in India, Ghana, Uganda and elsewhere in Africa.

“I was astounded by how diverse the people and their projects are,” he says. “A Mongolian farmer wants to identify pathogens in camel milk. There is a broad range of ideas from people who are passionate about the context off the tool.”

Prakash is putting the proposals into book form to bring cultural context to the project as well as providing a repository of ideas. The project proves how versatile the tool can be, he notes. Although the initial applications are in front-line health care in developing areas, Prakash sees potential for environmental monitoring of various pollutants, among other subjects.

To take development to the next level, Prakash is looking for about $1 million over the next three to four years. Demand certainly seems to be there. Prakash says he has been approached by a government representative from Singapore where officials want to put a Foldscope into the hands of every student.

There are a lot mechanics in how this is built. By the act of human folding, you can get a really precise optical alignment, out of origami.Prof. Manu Prakash, Stanford University