Flying to Space on Butterfly Wings

Flying to Space on Butterfly Wings 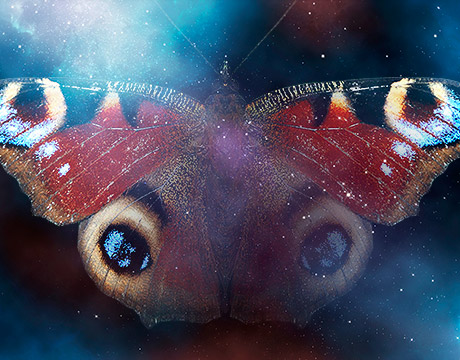 You’ve heard of the butterfly effect: the flap of a butterfly’s wings in Ecuador could result in a tornado in Kansas. Two mathematicians will use the phenomenon to explore something that seemingly has little to do with butterfly wings: cutting the cost of space travel.

Those decreased costs could, in turn, open up the final frontier to greater exploration.

“If we could harness the dynamics behind the butterfly effect we could move spacecraft with very little fuel, extend the life of satellites, or send robots to the moon inexpensively,” says Rafael de la Llave, a Georgia Tech mathematics professor.

He has teamed with a mathematician at Yeshiva University and designers at the Jet Propulsion Laboratory to apply those dynamics to space mission design. 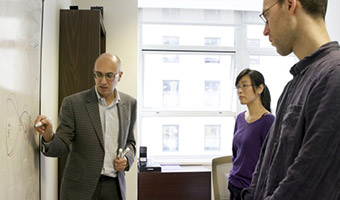 The butterfly effect–also known as the Arnold diffusion mechanism–states that small amounts of force, applied at the right moments, can produce large effects over time. It offers a way to understand and mathematically describe what happens when a simple physical system is modified slightly, de la Llave says.

To visually depict the dynamics induced by the butterfly effect, de la Llave attaches two one-inch-diameter hex nuts to strings of the same length, which he then hangs them from a clothesline.

With the hex nuts at rest he taps one and it begins to swing softly. Within seconds the other nut also begins to move. Eventually the two hex nuts begin oscillating as they transfer energy from one to the other. Where more hex nuts are called into play, they’d soon begin to exhibit more complicated geometric patterns as they oscillated. And it all started from that first, small tap.

If we could harness the dynamics behind the butterfly effect, we could move spacecraft with very little fuel, extend the life of satellites, or send robots to the moon inexpensively. Prof. Rafael de la Llave, Georgia Tech

For another example, think of a person who pushes a child on a playground swing. Even though the person gives only a tiny push each time the swing comes back, the amplitude of the swing keeps increasing, says Marian Gidea, professor in Yeshiva University’s graduate programs in mathematical sciences who is part of the project.

Now the goal is to make those oscillations “mathematically explicit,” in the words of de la Llave, in a way that can be applied to space flight.

Spacecraft typically follow conical routes that have been found to use the least fuel. But those routes still require long detours to get to the final destination. Those detours, of course, burn fuel.

The dynamics behind the butterfly effect can be used to find the small forces that result from the intertwining of the natural gravity of the moon, sun, and planets. Those forces open up “space superhighways” that spacecraft can glide along without burning any fuel at all, Gidea says.

Adding small maneuvers at precise times and locations along the pathways could save even more fuel, he adds.

For space missions, rather than a parent pushing a swing, the tiny first flutter is the combining of the gravitational tides from stars, planets, and moons that eventually opens a space superhighway, Gidea says. Because celestial bodies are moving all the time, the formula is needed to continually find the superhighways, de la Llave adds.

The first flutter could also be that of a rocket engine firing at just the right place in its flight when a boost is needed to accelerate orbit, Gidea says. For the project, mathematicians Gidea and de la Llave are charged with applying the Arnold diffusion mechanism to find those first pushes and follow them as they’re amplified over time.

In time—and with advancing technology—their method might even allow spacecraft to visit the moons of Jupiter systematically, de la Llave says.

“If we want to go around jumping from moon to moon, applying these new advances in mathematics can help us get there at much, much lower cost, making such a mission so much more doable,” he says.