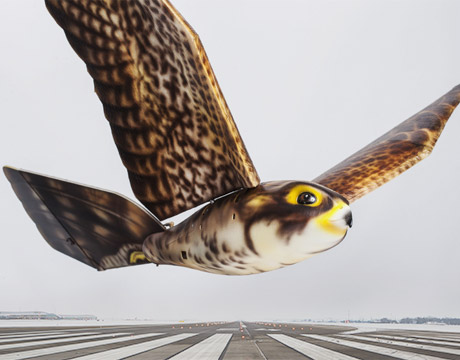 Collisions between birds and airplanes have always been a major concern at airports around the world. The cost of bird control is estimated in billions of dollars, and dispersal methods include physical barriers, netting, and mobile patrols equipped with acoustic, visual, and physical scaring devices. The problem with these methods, however, is that birds quickly adapt and simply fly around or through them.

But now a company in the Netherlands, Clear Flight Solutions, has developed a life-like robotic falcon/drone that is highly effective at scaring away birds from airports. The company recently received about $2 million from Cottonwood Euro Technology Fund to expand its work, allowing it to become a global leader in bird management.

Called “Robird,” the robotic falcon mimics the flight of a real peregrine falcon. The flying motion is so realistic that birds immediately believe the falcon is real and leave the area. Climbing hundreds of feet and reaching speeds of 50 miles per hour, the remote-controlled falcon swoops, glides, and flaps it wings.

“The robotic raptor owes its light weight (1.6 pounds) to 3D printed bodies of nylon composite with glass fiber, and to a lithium polymer battery,” writes Erica R. Hendry. “Perhaps the greatest engineering feat is getting lift and propulsion solely from flapping, a complex motion that has long puzzled scientists including, notably, Leonardo da Vinci.”

Each foam wing flexes to different degrees across its length and attaches to a double hinge at its base. “Although we are not 100 percent accurate in the flight movement, achieving well-controlled flapping wing flight with the same size and same weight of the actual bird, with comparable flight performance, is absolutely unique,” says Nico Nijenhuis, co-founder and CEO of Clear Flight Solutions. “We keep improving the movement and control to become more and more like the real thing.”

Deployment of the Robird also requires a pilot and an observer, who watches the other air traffic. “If you operate at an airport, there are a lot of protocols that you have to follow,” adds Nijenhuis. “You’re working in a high-risk area and there are all kinds of things that you need to check. We use the latest technologies, but the human aspect also remains crucial.”

Tests show that Robird can reduce pest bird populations by up to 75 percent over time. This is generating interest from all over the world. “Right now we are involved with projects in seven countries,” says Nijenhuis. “We’ll be expanding that in the upcoming years. Exciting work! Other potential applications are in the fields of animal observation and protection, biological research, and the safety and security sectors.”

As a result, Clear Flight Solutions continues to grow and now employs 15 people, including a retired 747 captain. The company is intent on eventually taking the human element “out of the loop,” says Nijenhuis. “In the future, the birds will operate as autonomously as possible, detecting and chasing birds by themselves.”

Achieving this will require the addition of more sensors and other technologies to the birds. For example, say the Robird is flying at 80 km/h in one direction and a helicopter is coming at 180 km/h from the other direction. What combination of sensors is needed to detect that helicopter, make a decision on what to do to avoid a collision, and then actually execute that action? “These are the types of problems we’re facing,” says Nijenhuis. “Right now there is no combination of technologies that can be integrated into a bird that can weigh only a maximum of 750 grams, which is light enough, powerful enough, and does not consume too much energy to actually fulfill this task.”

The company is also putting its general knowledge about drones and nature to good use in other projects. “For example,” says Nijenhuis, “we’ve developed a multicopter drone that can automatically find bird nests, fawns, and other animals in agricultural fields to save them from agricultural machines, a beautiful example of the combination of our knowledge and experience.”

For Further Discussion
In the future, the birds will operate as autonomously as possible, detecting and chasing birds by themselves.Nico Nijenhuis, CEO, Clear Flight Solutions