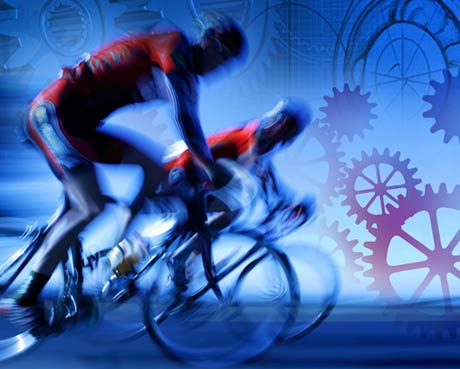 Mark Chiles, chief technology officer of Costa Mesa, CA-based Relay Fitness, says there are many areas of fitness that pull in the engineering perspective. "What we face in product development is trying to understand how users actually want to use equipment, a step many people don't think hard enough about," he says. "So many products are exercise bicycles that came from real bicycles and treadmills that came from industrial treadmills. It needs to be taken to the next level and many times it isn't."

To Chiles, that creates an opportunity, as the average exerciser looks for equipment that is simple, safe, and not intimidating. "When you begin to create exercise equipment, you need to start with paper," he says. " 'What am I creating here and why?' You have to answer that before anything else. After you draw your initial design then you can go to CAD or the machine shop and start building. I'll get whatever pieces and parts I can find, put a person on different versions so they can give feedback and we probably go through six different prototypes, each one a little different in adjustability until we find the best solution for a variety of users. Your goal is to serve a great number of people."

Chiles and his team used this philosophy when they created the Evo Fitness Bike. "One of our thoughts was that some people weren't feeling like being a part of spinning classes," says Chiles, who received his mechanical engineering degree from California State Polytechnic University, Pomona. "We found out they didn't feel comfortable in the seat. The typical indoor cycle bike has aggressive handlebars low and forward—puts a rider at a bent over position—great for road cyclists used to that for aerodynamics but for someone in the gym it's painful to the neck, shoulders, and lower back. We raised the handlebars and moved the back so the rider can be in a group cycle class and still be in the upright seating position."

Still, the prospective customer isn't just an individual but a gym—and cutting maintenance costs per machine for a commercial setting can have a huge effect on the bottom line. "Since most exercise bikes are created like normal bikes, they're not really fit for clubs," he says. "They're used in there eight hours a day every day. We applied a better technology with this in mind by using things like a planetary gear system and (sealing) the drive train."

Beyond function, the visual aspect must be considered by any designer. "You want to create something that will even get the average person to approach," he says. "Not as easy as it looks since many pieces on machines look like they would hurt you. You want to avoid having any sharp edges, overhanging parts that look like they will fall on you. Also, make the control panel easy to read and user friendly."

Once past the design process, there's still the area of safety approval. "There are quite a few standards out there in terms of regulatory agencies," Chiles says. "You have to get through both the U.S. and Europe, but then you have to meet chemical contamination codes in, say, California. There are strength requirements for it holding up and also that it doesn't get an arm or a leg caught in the machine."

Of course, after all of these things, one still has to hope it flies with the public. "There's a lot of competition out there because anyone can put a machine out on the market," he says. "The good news is it allows freedom that way. The bad news is people drop a lot of money sometimes before they realize their product just doesn't work."

There's a lot of competition out there because anyone can put a machine out on the market.Mark Chiles, chief technology officer, Relay Fitness